MOID GET BIGGEST FUND UNDER 2013 BUDGET 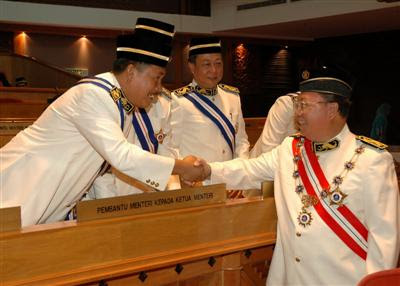 This allocation will have a profound impact in terms of improving the community's quality of life and will be distributed to four departments under his ministry.

RM186.9 million will be allocated to the Public Works Department (PWD). The department will spend RM109.1 on the construction of roads in major cities and small towns throughout the state and in the sectors identified as drivers of the economy such as agriculture, manufacturing and tourism.

Part of the RM164.9 million allocated to the Sabah Water  Department (SWD) will be used to continue with the Non-revenue Water Reduction Program, Pipe Installation Program and Booster Pump System Upgrade Program.

Besides that, RM7.9 million will be spent for the building or upgrading of water treatment plants and 'Muka Sauk' (a building erected at the river bank which houses submersible pumps). RM11 million is allocated for research work and the Design Preparation Project.

Pairin also told the Dewan that the RM13.5 million allocation for the Ports and Harbor Department will be utilised for the installation of beacons and navigation aids to increase the number of water traffic facilities in ports and rivers.

Dredging river works will also be conducted and RM1 million is the expected cost. Some areas have been identified for this work such as the Garama River and Kimanis waters. The Shipping Traffic Monitoring Towers construction in Kimanis, worth RM3.5 million, will be continued. It is expected to be completed in 2013. A tug boat costing RM7.4 million is also in the implementation schedule.

He added, the Railway Department will be receiving RM3.25 million and part of it will be utilised to upgrade the railway services in order for it to be an alternative public transport  that is reliable and comfortable for the people.

The Deputy Chief Minister also said, "My ministry is concerned with the current electricity supply situation in Sabah. Sabah Electricity Sdn Bhd (SESB) has assured us that they will continue to work with the existing resources and provide a more reliable source of electricity supply. As a positive move, the Federal Government, between  2010  and 2012, has channeled funds of RM724.0 million in order to upgrade the electricity supply infrastructure in Sabah particularly to strengthen the generation, transmission and distribution sector." (Insight Sabah)
Posted by sabahkini.net at 01:32