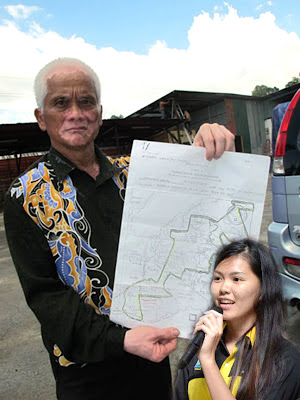 She said, for example a land area of 60,000 hectares in the district of Kota Marudu and Pitas has been given to Syarikat Begaraya Sdn Bhd, a private company.

"Why Sabah BN government gave its vast land to a private company when in fact, involves many Native Customary Right (NCR) lands. A total of 35 villages in the district of Kota Marudu and Pitas are confronted with land issues, such as duplication of NCR applications. The lands which are now producing crops and grown rubber trees planted by the villagers for years.

"If the slogan of the Prime Minister "People first", would not this be more meaningful if distribution of the 60,000 hectares to the people instead of a private company only.

"In addition, according to the State Director of Lands and Survey Department, Datuk Osman Jamal published in Daily Express on 15 August 2010, land application of Syarikat Begaraya Sdn. Bhd. was approved on 19 March 1996 by the state government under the leadership of the Chief Minister of the time, Datuk Salleh Tun Said Keruak, two months before Datuk Yong Teck Lee was appointed as Chief Minister on May 28, 1996.

"But the BN has spread lies to the villages in Kota Marudu and Pitas that Yong allegedly approved the land to Begaraya.

"We, as young people, must take the initiative to provide information or correct information. Do not let the BN leaders continue spreading lies and mistreatment of our leaders. Young people also have to be brave enough to move forward in the political arena for a brighter future.

Pathlyn Leosie Mikat said this in a speech entitled "The Future of Youth Sabah" in Kudat recently.