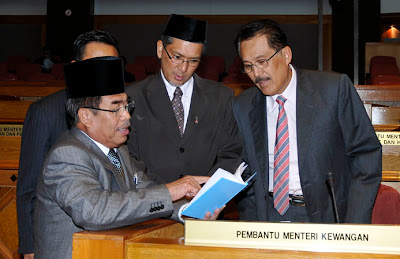 DURING his ministerial winding-up speech at the State Assembly last week, Yahya gave an account of some of the salient achievements that the various departments and agencies under his ministry have made over the past years.

Milk is one of Sabah's achievements, as the state has become the largest fresh milk producer in Malaysia. As expected, Sabah became  the primary fresh milk supplier under the 1Malaysia fresh milk programme, Yahya told the assembly.

Elsewhere in the agricultural sector, the ministry has succeeded in using the artificial insemination (AI) method to breed calves. This is significant for the state, as it means that Sabah no longer depends on the importation of bulls from overseas and will be able to rapidly increase the number of cattle in Sabah," Yahya added.

Yahya named the establishment of the Keningau Integrated Livestock Cluster (KILC) as another success in the livestock industry. Set up as the first nucleus breeding farm in Sabah, the 834 hectare centre is a collaboration between Sabah and the government of Brunei. KILC is expected to have 2000 cows which will produce 80 percent milk and 20 percent beef.

"This venture is profitable to us because Sabah is the only state free from the foot-and-mouth disease. As such, Sabah has a big potential to become the largest cattle exporter as well as exporter of high quality breeds in the ASEAN region," Yahya said.

"All this shows that the departments and agencies under this ministry have already established their reputation  as international players in this field," Yahya added.

Food  security is crucial and Yahya stresses sustainability of food supply as a top priority.

In this regard, , the establishment of a rice granary in Kota Belud is well under way. The federal government has allocated a sum of RM14.3 million in the recent national budget for this purpose.

According to Yahya, his ministry has worked toward the development of the first phase of this project, utilizing 800 hectares in Kampung Taun Gusi, Kampung Tempasuk, and Kampung Jawi-Jawi, all in Kota Belud. This project involves 762 farmers, who will be paid an incentive of RM 2000 per hectare per season.

"We will continue this effort until Kota Belud becomes the largest rice producer in Sabah and is able to guarantee the supply of rice for all in Sabah," Yahya told the Assembly.

The Agriculture Department has also developed a Tanaman Kekal Pengeluaran Makanan (TKPM) programme, which has been in operation since June 2010.

Located in Tawau, the programme involves 51 entrepreneurs, utilizing 96 hectares of land. To date, the programme has generated a total income of RM877,152 through the production of 619,756 tonnes of vegetables and fruits.

Commenting on the 2013 State Budget, Yahya congratulated the Chief Minister Musa Aman on a realistic budget. With an allocation of RM463.01 million to his ministry, Yahya expressed great confidence that his Ministry  will be able to continue to improve the ministry's performance next year and in the years to come. (Insight Sabah)
Posted by sabahkini.net at 02:17