MUSA CLEARS THE AIR ON THE NCR ISSUE 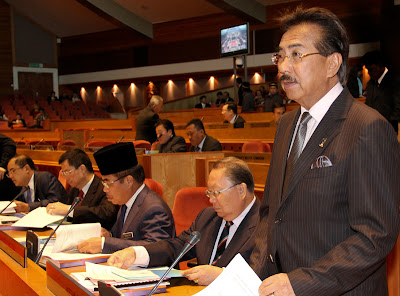 ANSWER .....Chief Minister Musa Aman during the Question and Answer session at the State Assembly.

WHEN the Dewan Negeri debated the 2013 State Budget yesterday Chief Minister Musa Aman made good his recent promise to give the NCR issue a good airing at the (then) forthcoming State Assembly meeting.

At the Dewan yesterday his opportunity came when Kunak Assemblyman, Nilwan Kabang asked whether the Government condoned the 'abolishment' of the NCR status of areas where the local native community have occupied for a long time, and do so just in order to enforce the provisions of the Sabah Land Ordinance.

The Chief Minister vehemently denied there had been any such abolition.

"Accusations that the State Government is sidelining NCR land claims and discriminating against natives are totally untrue," he said and charged that the opposition had twisted and manipulated the NCR issue to gain political mileage.

He assured the House that the State Cabinet has the final administrative authority on land matters as provided by the land law and NCR is still being administered as before and is very much alive.

He told the House that contrary to allegations Native Customary Right (NCR) land claims are getting priority attention and are being dealt with administratively in accordance with the state's land law.

"Natives wishing to make any NCR claim under Section 14 of the Sabah Land Ordinance can still submit their claim to the Assistant Collector of Land Revenue (ACLR) notwithstanding the provisions under the 1930 amendment to the Land Ordinance, " he said.

Giving a historical account of the NCR provision of the land law, Musa told the House that the 13 December 1930 amendment to the Sabah Land Ordinance sought to regulate and check the hitherto free-for-all situation involving land ownership.

The Chief Minister gave statistics over a 15-year period between 1997 until September 2012 to show that NCR has been alive and well. He disclosed that the Lands and Survey Department received and registered 615 NCR land claims cases, involving 1,164 claimants. Of these, 207 cases were given NCR recognition, 70 cases were found to be groundless and were thus rejected while 338 cases are still under process.

Assuring the House that land ownership by Sabah's natives is well provided for and protected in the state's land administration, the Chief Minister listed five methods through which natives could apply for land, and through which the State seeks to protect and preserve native land ownership.

- The first method is  to give ownership to natives through the normal process of land application and approval. He said this process has been on-going, as is indicated by the 190,452 Native Titles (NT) issued up to December 2011 by the State Government through the Lands and Survey Department, more than half of the 348,652 land titles issued during the period.

- The second method is for natives to gain access to land that has been gazetted as a Natives Reserve, or communal land, such as for grazing of livestock and village housing under Section 78 of the Sabah Land Ordinance.

He said up to Dec 2011, a total of 53,190.857 hectares had been gazetted for native communal use such as village and grazing reserves.

- The third way is  through a Communal Land Title under the amended Section 76 of the Sabah Land Ordinance that was gazetted on Dec. 10, 2009.

According to the Chief Minister, one reason for the issuance of Communal Land Titles is to protect the interest of natives occupying state land or part of a forest reserve in the vicinity of native village settlements.

He said a Communal Title has distinct advantages. Through it the land alienation process can be speeded up and the land title issued en bloc, thus resolving any NCR claim issue, overlapping land applications and ensuring natives do not easily sell off their land for quick money.

He told the House that another 52 Communal Titles covering 23,046.07 hectares would be issued to 5,373 beneficiaries in seven districts.

He said  that the Communal Titles could at some point in the future be sub-divided into individual lots should the beneficiaries so wish, but not before the individual lots for which they seek separate titles have been fully developed.

- There is the fourth avenue for natives to have a stake in the land that they cultivate. This is in the form communal grants, that is, the granting of land to government agencies for in situ agricultural development in partnership with natives in the area on an equitable basis.

Musa disclosed that the state government is planning to issue communal grants in Kota Marudu, Pitas, Tongod, and Semporna totaling to 47, 177 hectares.

- Finally, the fifth avenue for natives of Sabah to have a share in land development and ownership is through a government ruling under the Sabah Land Ordinance that requires large companies with land holding 1000 hectares and above to give a 30% (or 45% if so provided in the land title) native equity to native or government agencies in trust for the natives. This ruling comes into force 5 years after the land is fully developed.

“To allow for a few of these communal grants to be issued, in 2010 the government excised 24, 563 hectares of land from the Sook Plain forest reserve and Mandalom for the well-being of the natives living in these areas.”

He also reminded the House that he had even instructed the Forest Department to stop all re-delineation survey of Forest Reserve boundaries that were alleged to have encompassed areas claimed by the native communities in these areas.

To give members of the State Assembly an idea of the size of native land holding in Sabah, the Chief Minister put the overall total of government land allocated to natives at 890, 626 hectares, a total area larger than Selangor's 795, 600 hectares in all. (Insight Sabah)