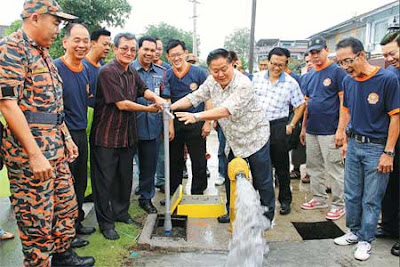 PROACTIVE.... Yong turns on the fire hydrant to mark the launch of the Fire Hydrant Maintenance Programme in Poh Kwong Park, Kuching. Azlee is at fifth left.

KUCHING: Huge monetary loss due to fire hydrant chamber cover thefts has prompted Batu Lintang Fire and Rescue Station to come up with a theft-proof version to fight the menace.

This innovative cover, dubbed ‘Penutup Chamber Mega 2012’ or ‘PCM 12’, which might be used nationwide soon, is made from a mixture of steel and concrete, and is of little value to scrap metal thieves.

Batu Lintang Fire and Rescue Department chief Mohd Azlee Mohd Arus said PCM 12 was created by the station’s Innovative and Creative Team to curb further loss of chamber covers that protect chambers from getting filled with rubbish or soil, thus blocking speedy access to turning on the water.

Their hard work won them the Innovative and Creative Team competition for the Kuching zone recently.

Speaking at the launch of Fire Hydrant Maintenance Programme in Poh Kwong Park here yesterday, Azlee bemoaned that 647 covers valued at RM258,800 were stolen in the first eight months of this year alone.

“This is worrying, as we have 1,900 fire hydrants between Satok and 10th Mile,” he said at the gathering officiated at by Deputy Minister of Works Datuk Yong Khoon Seng.

“PCM 12 is the better alternative to overcome vandalism and theft.”

Yong said he would bring their invention up with federal government for consideration to be used nationwide.

“I will have a discussion with the Ministry of Housing and Local Government on the new cover, and hope that it will be approved for use nationwide. The existing steel covers are expensive and are often stolen,” said Yong, who is also Stampin MP.

The Fire Hydrant Maintenance Programme was organised by the Fire and Rescue Volunteer Teams together with SUPP Batu Lintang Disaster Management Committee.

It aims to train volunteers to keep their area’s fire hydrant in working condition and report it immediately if it isn’t.

In addition, a certificate and token of appreciation was presented to Poh Kwong Park resident Stephen Yeo for agreeing to monitor the condition of the fire hydrant just outside his house.

Programme organising chairman Phillip Chen said that proactive participation from the community is vital to ensure that the neighbourhood’s fire hydrants were in working condition.

There are 110 Fire and Rescue Volunteer Teams in Sg Maong, Tabuan Jaya, Kampung Kudei and RPR Batu Kawa. They were established on Oct 20. (BP)