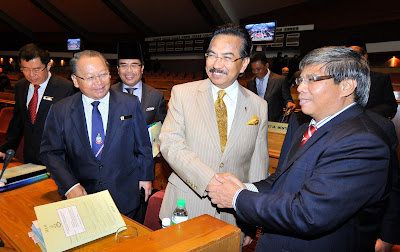 A family man with four children Lucas Umbul looks back to a hard childhood beset by poverty. He struggled hard to overcome many obstacles and managed to  pursued tertiary education in the United States.

"I come from a poor family living in Kg. Melalap Tenom. My father passed away when I was 2 years old. My mother took care of us and she worked as a rubber tapper," he said.

Previously, he was a lecturer at the Teacher Training Institute in Keningau. He opted for early retirement to go into politics.

Dr. Lucas, who is of Murut decent grew up in Tenom. He said he will use the opportunity as a senator to help the people of Sabah, particularly those in the interior areas.

"I can do a lot for the community. I want to ensure that the people of all ethnic groups especially in rural areas benefit from all government policies," he said to reporters outside the Dewan after the Sstate Aassembly adjourned yesterday. (Insight Sabah)
Posted by sabahkini.net at 13:06