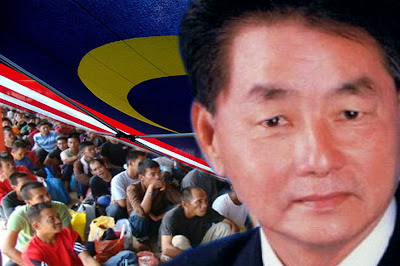 CONFUSING......How is that the Sabah immigration officers can't seem to recognise documents issued by their own department?

TAWAU: An illegal immigrant crackdown in the east coast of the state is taking a toll on businesses and palm oil plantations here. State representative, Jimmy Wong said plantation managers are furious with the Immigration Department for detaining registered foreign workers for days during their operations against illegal immigrants.

“They say the immigration authorities don’t seem to be able to distinguish on the spot as to whether the documents the department issued to foreign workers are real or fake.

“They are detaining all foreigners they come across for two to three days and this is causing loss of income for the plantations as well as scaring their workers,” Wong said.

He urged the Immigration Department to be more professional when carrying out their operations at estates and business premises and not just detain everyone for screening, even those who can prove on the spot they are legitimately employed.

Employers relying on foreign workers to carry out their business operations have complained that they are incurring losses after their workers were detained for screening at detention centres despite having all their papers in order.

“A palm oil estate owner in Kunak said he recently incurred unnecessary losses after his workers who have documents were taken away for screening and only released after two to three days,” Wong said after contributing cows to Kg Jawa, Kg Bukit, Kg Saddhani and Kg Baru for their Hari Raya Haji celebration.

The Sri Tanjung representative said it was appalling to learn that the Kunak’s immigration officers when carrying out the operation could not distinguish its own documents issued for foreign workers were fakes or not.

“The immigration officers went to this estate and they were shown the workers documents issued by the department during the check, but the officers still told the workers to board the lorry to be taken to screening centre.

“The workers only returned after two days. The estate owner said that as there were no workers to harvest the palm oil fruits and thieves had entered the plantation and stolen the ripened fruits off his trees,” he said.

“How is it that the department officers could not determine its own documents such as worker permit and passport is fake or not. Either there is no standard or are they inexperienced.”

Wong who is also the DAP Sabah chairman said that apart from disrupting the business operations of legitimate establishments, the inability to verify their own documents on the spot called into question the purpose of such documents.

“Does it mean there are many falsified documents out there? I hope the Immigration Department will carry out its operation in a profession way.

“Ensure experienced officers lead the operation. The department must improve the way it conducts operation on foreign workers,” he said.

The state and federal government authorities have launched a series of crackdowns on illegal immigrants in the state after years of permitting thousands of them to enter and settle down in Sabah.

The Immigration Department’s task has been made all the more difficult as several thousand of these people have since obtained citizenship through undisclosed means and have been used by politicians to sway elections since the 1990s.

After years of allegation and denials by the federal government, a Royal Commission of Inquiry was set up recently to shed light on the issue.

Sabah’s population and registered voters increased dramatically over the last three decades and many locals point to political shenanigans by those in power at both federal and state levels for the unexplained phenomenon.
Posted by sabahkini.net at 07:22