WHAT’S THE MATTER WITH OUR JUDGES? 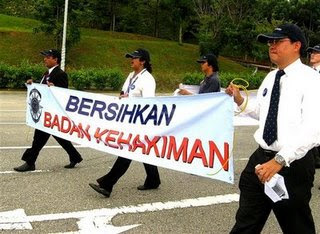 DON’T THE people have a right to self defence in life-threatening situations? This is a seriously worrying question. Social media has been raging over this topic for some time now.

First we saw how it is OK to rape a 13-year-old girl if you’re a star when Court of Appeal President Raus Sharif led the three-man panel in ruling that the jail term for national bowler Noor Afizal Azizan be substituted with a bound over sentence for good behavior for five years.

Now, two brothers are sent to the gallows for killing a burglar. Indonesian brothers Frans Hiu, 22, and Dharry Hiu, 20, were found guilty of murder for defending themselves against a violent robber. The High Court in Shah Alam sentenced them to death on Oct 18.

The brothers were jointly charged with having a common intention in the murder of 26-year-old R Khartic at a shophouse in Sepang on Dec 3, 2010. They were caretakers of the premises.

In her brief judgment, Justice Nurchaya Arshad ruled that the prosecution had successfully proven the case beyond reasonable doubt and sentenced the men to death.

What does “in her brief judgment” mean? How brief is brief? Two human beings are being deprived of their lives. Wouldn’t we require the court to give more substantial consideration than just a brief judgment?

Here are the facts of the case: three guys were inside their room. A burglar tries to break in first through the front door, then through the back door, and finally he climbs through the ceiling and falls into the room. There is so much determination and premeditation on the burglar’s part – he seriously wants to break in.

He then violently attacks the three occupants of the room. One of the occupants runs away. The other two defend themselves, there is a desperate life and death struggle and in the process the robber dies. Now the robbery victims are ironically sentenced to death.

Why not charge them with assault which carries a lesser sentence instead of murder? Criminal intent (Mens Rea) is a vital ingredient in all murder charges. How could the two brothers have entertained such an intention when in fact it is the burglar who had broken into their room and then attacked them?

He must have startled the brothers when he crashed through the ceiling and started attacking them. In self defence, the brothers fought back with their bare hands. They did not have any weapons in their bedroom.

Acting in self defence

The Malaysian Bar Council has weighed in on the issue and said that people should not take the law into their own hands.

Should the brothers not have defended themselves when attacked? The incident involved a robber who had gained illegal entry into a building and was motivated by a predetermined criminal intent.

In such cases, isn’t it instinctive and normal for the occupants to react spontaneously to restrain an intruder who may pose a danger to their lives?

It would be interesting to know which officer in the Attorney-General’s Chambers sanctioned the murder charge, knowing full well that the brothers were acting in self-defence. Don’t the people have a right to self defence in life-threatening situations? This is a seriously worrying question.

Why didn’t the court assign counsel for the defendants for a charge as serious as murder and for which a death sentence was a distinct possibility? The brothers were the only ones who testified in their own defence.

Doesn’t this case and the subsequent the charge reek of a serious defect in our legal system? There have been many similar cases where victims of crime have been penalised but for the sake of this article we will remain focused on this case alone.

Rightfully, several groups are calling for a judicial review into the death sentence imposed on the two Indonesian brothers, with National Crime Prevention Foundation vice-chairman Lee Lam Thye saying that the sentence was too extreme and would have implications on the way people react to situations that involved their own personal safety and security.

MARAH has also started a forum on the subject. There must be consistency and fairness in how sentences are meted out. What were the brothers supposed to do? Wait for the robber to kill them first?

What are we the public supposed to do when someone breaks into our home? What kind of signal is the court giving?

Given the current crime free for all spree in Malaysia, should we all simply give in to the inevitable and just wear t-shirts with a bright red target painted on it?

(NOTE : Dave Avran is the founder of MARAH (Malaysians Against Rape, Assault & snatcH).
Posted by sabahkini.net at 11:35