WHEN DARKNESS FELL ON KKIA 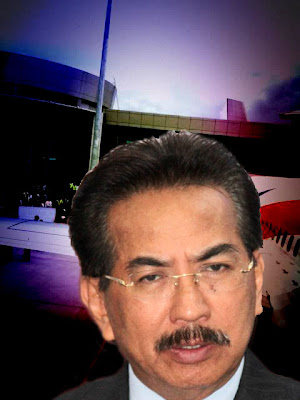 CHIEF MINISTER Musa Aman's initial reaction to the closure of KKIA on the night of 25th and 26th because of lighting failure was one of consternation and great disappointment.

Concerned that the closure had inconvenienced thousands of travelers and may possibly have put Sabah's image as a tourist destination in jeopardy he ordered a full report from the Malaysia Airports Holdings Berhad.

"The State Cabinet is expecting a full report from MAB and on measures to be taken to ensure that this doesn't happen again in the future," Chief Minister, Datuk Seri Panglima Musa Haji Aman's said in a statement.

The report did not take long in coming. According to a press release from MAHB sources, the first hint of impending trouble came at 5.40pm Thursday 25th October 2012, on the eve of Hari Raya Aidil Adha when a routine inspection found that the runway lights lit dimly and were not up to the required brightness.

Shortly after, at 6.10pm, air traffic controllers confirmed that the lights were indeed  dim. As this would impair visibility and compromise safe landing for incoming aircrafts, Malaysia Airports Holdings Berhad (MAHB) took immediate action to close the runway for further investigation. All airlines were immediately informed of this closure.

MAHB suspected that the dim lights could have been due to electrical current leakages in the old cables that they said were in the process of being replaced by their contractor.

According to MAHB press release this is part of the overall upgrading of KKIA facilities, which include the terminal, runway, taxiway and apron under the KKIA Redevelopment Project undertaken by the government. MAHB further reported that efforts were made to pinpoint the leakages in the 12 km cables in order to rectify the problem.

In the morning of Friday, 26th October 2012, rectification works had to be put on hold to allow for flights to and from KKIA to resume daylight operations.

MAHB said the sub-contractor was requested to immediately complete the installation of the new cables and lightings. The installation works can only take place at night commencing  at sunset around 6 p.m. when the runway, again, had to be closed for safety reasons.

Meanwhile, portable lights from various airports including Tentera Udara Diraja Malaysia (TUDM) were rushed  to Kota Kinabalu. These portable lights were scheduled to arrive on flights prior to sunset to enable night operations on 26th October 2012.

However, the arrival was hampered by bad weather. The full compliment of portable lights only managed to arrive at 8.00p.m. This was the reason why KKIA had to be closed for an additional night from 6.00pm to 10.00pm.

However, as the sub-contractor managed to install the new cables and runway lights,  the portable lights were therefore not used after all.

According to MAHB the runway was declared safe for operations at 9.30pm on 26 October 2012 and was opened for commercial night flight operations. MAHB further stated that with the installation of the new cables and runway lightings and with the provision of back-up runway circuit, the operations were  now running smoothly.

According to MAHB 51 flights were diverted, delayed or cancelled during the two nights and 6000 passengers were affected. (Insight Sabah)
Posted by sabahkini.net at 09:44