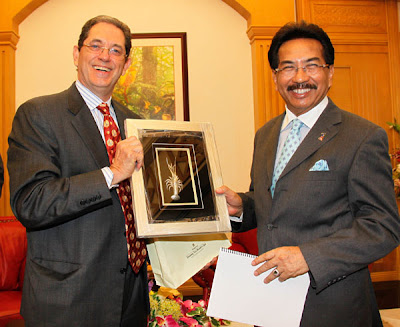 DURING the third day of State Assembly question and answer session, the State Assemblyman for Kunak, Nilwan Kabang asked the Chief Minister on the progress of the proposed lobster farming project in Pulau Timbun Mata in Kunak District, a joint undertaking between Inno Fisheries, a subsidiary company of Yayasan Sabah, and Aquafarm Inc from America.

According to project sources the proposed joint venture involves an investment of RM 2 billion and is expected to generate 20,000 jobs. In reply the Chief Minister confirmed that the project will be carried out on a 9,300 hectare coastal area in Pulau Timbun Mata, Semporna.

He said the State Cabinet approved the land for the project in March 2012. He said the lobster farm would require some 6000 hectares to accommodate the 18000 or so lobster cages plus additional area for related onshore and offshore facilities.

To be carried out by Integrated Lobsters Aquaculture Park (ILAP) in joint venture between Inno Fisheries SDN BHD and Aquafarm Inc from America the project includes lobster aquaculture for commercial production, research and development, contract farming and training as well as mussels farming as the food source for the lobsters.

The Chief Minister further explained that the inclusion of  contract farming was to allow , the local fishermen as well as small and medium-sized companies  to do business with ILAP. In this way, local aquaculture farmers and companies who join the program would gain access to the technology and support system for lobster farming and marketing.

Musa further disclosed that the West Coast area is found  to be the most suitable area for the production of lobster seeds. He said an application for funding has been submitted for consideration under National Key Economic Areas (NKEA) for agriculture. (Insight Sabah)