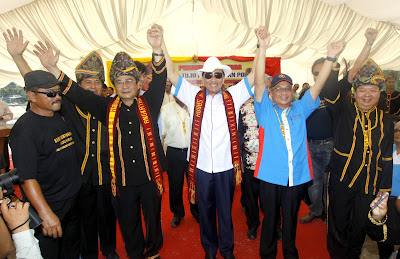 IT IS NOT for anyone to say whether or not Datuk Seri Panglima Wilfred Bumburing have any confidence in any of the political party that makes up Pakatan Rakyat (PR). This is because it was not his priority to become members of any of the PR components members.

After going through several soul-searching discussion with several PR leaders including Dato Seri Anwar Ibrahim, it was therefore agreed that Bumburing and Datuk Seri Panglima Lajim Hj Ukin  that through the respective plat form that they have established, their top priority would be to fully assist Pakatan Rakyat in their quest to topple the BN government and wrest control of Putrajaya.

Unlike BN where UMNO is the dominant force and all the other parties have to follow the dictate of UMNO, Pakatan Rakyat is made of of equal partners where no single party dominates the other members of the coalition.

For the record, initially UPKO leaders have decided and were prepared to bring UPKO out of BN and join PR.  Infact immidiately before the function on the 29th July 2012, there were suggestion coming from several UPKO leader requesting Bumburing and his group to postpone their intended date to quit BN-UPKO.

They  eventually agreed to let Bumburing go first while UPKO leaders sort out some technicalities. However, all these notions suddenly change when PM Dato Seri Najib Razak promised to announce the formation of RCI which would be made on August 11, 2012.

Currently, UPKO found themselves trapped by the announcement as until today the members of the RCI have yet to sit while the term of reference unveiled is nothing but a tool to try to appease the people. The PTI issue poses a huge problem, and yet there seem to be a lackadaisical attitude on the part of the BN government  in seriously taking steps in solving this problem.

What would UPKO do or say should the RCI failed to complete its reports during the stipulated time given to it and/or in the midst of it Najib dissolve Parliament and call for election? Or perhaps the RCI might not even be able to sit for their first meeting before the general election is called?

Would UPKO be prepared to go down and try to convince the rakyat to come and defend the failure of the UMNO-BN government in solving this problem? I urge the people to seriously think about how their future and the future of their grand children would be like having illegal immigrants population outnumbering them in every aspect. Let the people be the judge.
Posted by sabahkini.net at 15:38