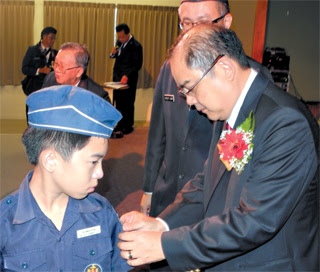 "It is not giving a good example to the youthsÉthey must be out of their minds," he said, commenting on news reports after the sexual exploits of Alvin Tan and his partner Vivian Lee in a sex blog came to light.

"In one of the reports, she (Vivian) also said that if her children are below 18, she would tell them that what she did was incorrect but if any of them were to do something similar, then she would support them no matter what.

"They seem to be proud of themselvesÉas the Minister of Youth, I condemn this kind of act," he said.

"I would rather be watching the Oppa Gangnam Style," said Pang.

Meanwhile, Pang called on the Boys Brigade to contact him for more information regarding government programmes through his Ministry to further develop its members in terms of economy, patriotism and religion.

"A good networking relationship between us can further enhance the development of our youths in Sabah as well as reduce the percentage of misconduct among them."

Pang said this at the Sabah Boys Brigade Founder's Day celebration held at the All Saints Cathedral, here, Saturday.

Pang pointed out that having been in existence for 129 years, the Founder's Day ceremony marked another milestone in the history of the Boys Brigade movement.

According to Pang, he was made to understand that the Boys Brigade in Malaysia had been serving youths in Sabah since 1967, with 15 companies in Sabah and 20 school platoons - accounting for nearly 2,500 members.

Meanwhile, praise and worship sessions as well as band performances were held, apart from the handing over of awards.