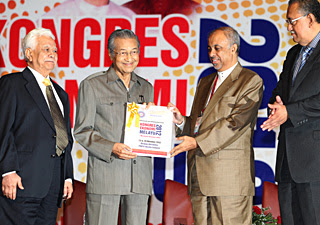 The resolution by the National Malay Congress (NMC) held on November 24 in Kuala Lumpur that government projects below RM100 million be given to Malay contractors under direct negotiation and that GLCs adopt a a more aggressive Malay Agenda is a dark and shameful spot in the history of Malaysia.

It is unbelievable that after the billions of ringgits wasted by the government to spoonfeed the Malays under the NEP and other affirmative programs, the former Prime Minister, Tun Mahathir, admits the Malays had not had enough, and that Malays are supposed to be now beggars in their own land!

It is no secret that Mahathir was making another thinly-veiled swipe against ther Malaysian Chinese for being economically successful in Malaysia. But he seems to have forgotten that this Chinese success is actually the root of the Malaysia’s econnomic success.
The Chinese are not the culprits, but the hero of Malaysia economics. It is the so-called Malays businessmen, political cronies and leaders like Mahathir who are the culprits. They awarded projects to themselves, gave the Malays all sorts of privileges and the Malays still failed, or as Mahathir in his senility says, had becomme beggars in their own land.
How is this possible? Let me quote one Bryant (of India) who wrote an open letter to Mahathir online: “As you are aware, the Malays control the rights to all the lands and natural resources in this country. They control all government institutions, GLC and state-owned companies. The Malays also dominate the lawmaking process in Malaysia including the decision-making processes in the formulation of the country's economy policies.

“From statistics we also know now that the Malays not only own the largest national assets but are also freely – and without conditions – allocated shares in public-listed companies. The Malays have also been accorded all kind of priorities when it comes to buying properties, awarding of public contracts, tertiary education opportunities including the granting of scholarships and even securing jobs in any of the government departments and agencies.

“Yet with all these privileges and rights enjoyed by the Malays, you still complain that not enough is done to help the Malays to catch up with the other ethnic groups, principally the Chinese? Then what else should Malaysia do to satisfy the Malays? Did the Chinese seize or rob anything away from the Malays or were their accomplishments the result of their hard work?”

The fact is the Chinese never did take anything away from the Malays; it is the Malays who have taken things away from the other racial groups. The Chinese is a race without any privilege or rights, and still they progressed!

Some decades ago the government made it compulsory for students to pass the Bahasa Malaysia in order to pass the SPM, with the expectation that this would pose a major challenge to the Chinese students. But to the chagrin of the Malay educationists, the Chinese scored better in BM compared to their Malay schoolmates!

Mahathir himself is fully aware of the weakness of the Malays as he had elaborated in The Malay Dilemma, so now he is proposing that this weakness be overcome by spoonfeeding the Malays even more.

He is ignoring the fact that whatever monetary gifts and privileges he gives to the Malays actually comes from the sweat of the Chinese who keep the trade and commerce in Malaysia alive and vibrant. It is the Malays who are doing al the wastage with the spoonfeeding, and most of what they get goes down the economic drain.

A good example is the fate of the Penang Malays who according to Ibrahim Ali had been sidelined by the Chinese in development. The reality is, according to an online writer quoted by Judith A. Nagata in “Heritage as History: Plural Narrative of the Penang Malays”: the “…Malays have done little to help themselves. Since the implementation of Malay preferential quotas and opportunities in the original New Economic Policy… many Malay have… grown too accustomed to their privileges, and have consequently made less efforts to achieve what others have strived for. Quoting the Minister of Trade and Industry in Mahathir’s cabinet in the 1980s, Rafidah Aziz, [who admitted] that‘Malays can achieve but can’t sustain it’: (‘Melayu mampu daya maju tetapi tak mampu dayan tahan’), the writer goes on to deplore how lands and preferential stocks and shares (amanah saham) designated for Malays in the stock exchange, have routinely been sold off for short-term cash… the Malays [should blame themselves], not outsiders, for their lack of competitive success today.”

Mahathir also need to remind himself that the national revenue mostly come from the Chinese who, according to the MCA, pay 83 percent of the nation’s income tax. Take away the Chinese businesses and the nation will stumble overnight.

The real cruelty and tyranny of the resolutions of the NMC is that, by seeking to give even higher preferential treatments for the Malays through a more concerted Malay Agenda, it is actually grossly unconstitutional, for the simple reason that Article 153 of the Federal Constitution grants the Yang di-Pertuan Agong (King of Malaysia) responsibility for “safeguard[ing] the special position of the ‘Malays’ and natives of any of the States of Sabah and Sarawak…” It’s deplorable that former leaders like Mahathir have the gall to talk only about Malay interests when the country doesn’t belong to the Malays only.

This is another proof that the ultra-Malay nationalists have no feeling whatsoever for the interests of the other racial groups in Malaysia , and least of all the people of the Borneo States, without whom there would have been no Malaysia . The Malay nationalists keeps talking of races in Malaysia as being limited to the Malays, Chinese and Indians, forgetting that in Sabah and Sarawak there dozens of other Malaysians races needing attention.

Mahathir too, needs to appreciate that the people of the Borneo States are contributing a tremendous lot to the federal coffer, mainly through its oil revenue, and much of these Borneo resources actually goes into the pockets of Malay Umno cronies. As such, to forget and sideline the natives of the Borneo States is an act of ingratitude and plain arrogance.

This is exactly why the State Reform Party is fighting for the Borneo Agenda, for preservation and restoration of the rights and autonomy of the Borneo States. We can’t depend on the leaders in Kuala Lumpur to give us what had been promised to use from the very beginning because they will always fall back to the Malay Agenda. It is so ironic that the NMC had resolved to make a stand against corruption, cronyism and abuse of power and when in fact their call for greater privilege for the Malay is actually to support corruption, cronyism and abuse of power!

What else do direct negotiation of project award, promotion of the Malay Agenda among GLCs, and more preferential treatments for the Malays mean, if not corruption, cronyism an abuse of power?

How far can direct award of projects to some selected Malay contractors actually help the Malays. This had been done a lot in the past, but the benefits had not gone down to the Malay grassroots. In fact now, there is rebellion among low and middle Malays because of their hatred for Umno which has been widely known to have failed to help the common Malay, but instead had only enriched and made billionaires among Umno cronies through corruption and abuses of power.

What the Malays really need is not anymore spoonfeeding but empowerment through socio-economic developments and rigorious mental revolution to make them succeed and be able to sustain and increase their wealth. What the NMC wants is only to increase privileges for the selected few, a step which will make the Malay proletariat hate the ruling elites even more, and join the opposition, including DAP, a Chinese party, to express their rebellion against the corrupt Umno leaders.