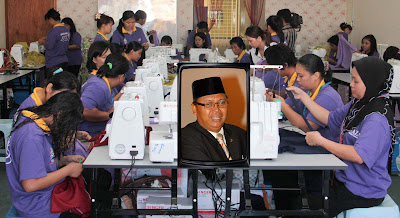 STATE Government and the Federal Government will continue to reduce the poverty rate for people in the state. Various programs have been developed to eradicate poverty such as Agropolitan, MESEJ, Local Economic Enhancement Programme (PPES) and other leading program to increase the incomes of the poor and hardcore poverty.

"The poverty rate in Sabah has been reduced from 24.2% for the year 2004 to 19.7% in 2009," Assistant Minister of Rural Development, Sairin Karno was replying to Assemblymen from Lumadan and Sulabayan on the action taken by government to help reduce the poverty index.

Sairin said the impact of these programmes towards the reduction of poverty rate can only be seen when it has been completed.

"Part of the projects under the eradication of poverty program has achieved its goal, such as the Estate - Hardcore Poor Housing Program (PPRT) in Kalabakan and Tongod where a total of 1,167 people received RM400.00 dividends on a monthly basis," he said.
He said a total of 2,000 hardcore poverty heads of households are expected to be involved in all of the MESEJ projects when its completed. Under the 1Azam program by the federal government in Azam Tani, Azam Khidmat, Azam Kerja and Azam Niaga so far involving 19,500 participants a total RM191 million has been allocated between 2010 and 2012 to help the poor to be economically self-reliant.- Insight Sabah