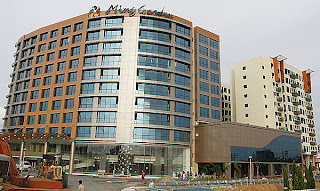 A STAGGERING 57m Chinese travelled abroad last year, according to the Pacific Asia Travel Association (PATA). They spent about 173 billion ringgit ($55 billion). Still, the World Trade Organisation (WTO) expects 100m Chinese to travel out of their country every year by 2015.

That is only 8% of China’s 1.3 billion population. And already they are making their small presence felt in Sabah which is cashing in on their influx.

A new four-star hotel opening in December makes no pretense that it is aiming at Chinese tourists. The Ming Garden Hotel & Residences is after all a 155m-ringgit joint venture between China’s Longma Construction Company Sendirian Berhad and the Sabah Urban Development Corporation Sendirian Berhad.

Longma is a subsidiary of Longyuan Construction Group Co. Ltd which is listed on the Shanghai Stock Exchange.

Andrew Wong, Ming’s general manager, says his company also has the first “full service apartments" in Kota Kinabalu. They are suitable for tourists who want a little homeliness: kitchen, dining and living rooms besides bedrooms.

Wong says there are 356 of these suites in his 11-storey building on slightly less than a hectare of land opposite Times Square looking out to the South China Sea. Indeed it was named the South China Sea Place. Its new name conjures up images of the great Ming dynasty of 1368-11644.

Other than these, the hotel has 244 guest rooms. Prices range from 266 ringgit for a standard room to 662 ringgit for a two-bedroom suite.

Tourism is Sabah’s second biggest earner, at about 4 billion ringgit a year, after palm oil. About 2.3m tourists come to the north Borneo island state every year. But Masidi Manjun, minister of tourism, culture and environment, says that tourist arrivals grew by 12% in July.

Chinese tourists have been coming to Sabah in larger number. Last year there were 97,072 of them. But they are still very small by comparison. About one million Chinese visit Malaysia every year. (Insight Sabah)