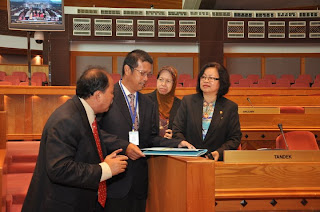 INANAM Assemblyman Datuk Johnny Goh has appealed to the Government to allow the sino-Kadazans or sino-Dusuns to continue using their race status instead of being asked to choose either Kadazan, Dusun or Chinese in their birth certificates.

He pointed to the statement by Tuaran Member of Parliament Datuk Wilfred Bumburing in the Daily Express on March 24, 2012 that ever since the British colonial administration, the sino-Kadazans or sino-Dusuns were recognised as natives as constituted under Article 64 of the State Constitution.

However, he said Bumburing questioned the reason why the present government was not recognising the fact that the sino-Kadazans and sino-Dusuns are natives because the National Registration Department (NRD) instead asked them to choose their race in the identification document either as Kadazan, Dusun or Chinese.

Being the President of the Sino-Natives Association, Goh said many sino-Kadazans and sino-Dusuns after seeing Bumburing's statement called him up and requested that he raise the issue in this State Legislative Assembly sitting so that the Government can look into it seriously.

He concurred with Bumburing that the people of Sabah had been given assurance that all their rights and privileges would be protected.

The sino-natives were silent when the Government froze the issuance of the Native Certificate in 1982 but now with the new requirement, Goh stressed that people with mixed-marriage blood cannot become a Chinese or Kadazan.

Goh said the sinos were thankful with the setting up of the Native Affairs Council (Mahins) that sits every three months to look into sino-Kadazan and sino-Dusun matters.

But, when they go to the NRD they were still being asked to choose the race in their children's birth certificate instead of just sino-Kadazan or sino-Dusun.

Goh said many sino-Kadazan and sino-Dusun are supporters of the Government and they still harbour hope that the government of the day would be able to assist them in this matter. (DE)