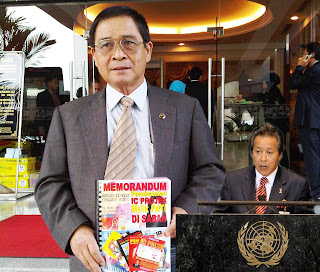 UPKO Deputy President, Datuk Seri Panglima Wilfred Bumburing said he appreciated and fully support the satetment by Foreign Minister Datuk Seri Anifah Aman in calling for an immediate halt to the ongoing exercise to provide as many as '40,000 delayed birth certificates and MyKads' to Children in Semporna.

Bumbring said Anifah Aman is actually supporting my debate speech in Parliament last week with regards to the illegal immigrants issue and the call to set up a Royal Commission of Inquiry to investigate and get to the bottom of this long-standing issues.

Bumburing Said he fully appreciate and support and the call made by Foreign Minister Datuk Seri Anifah in calling for an immediate stop to the ongoing exercise to provide 40,000 delayed birth certificates and MyKads to children in Semporna.

"Datuk Seri Anifah is actually supporting my speech in parliament last week over the said issues and he too is supportive on the call to set up a Royal Commission of Inquiry (RCI) to probe illegal immigrants and the issuance of dubious MyKads in Sabah.

"I am personally receiving daily report conveyed to me verbally that this exercise, providing late birth certificates and MyKads are going on in major towns in the East Coast and the number of such documents issued are reported to be in the regions of 1,000 in one week!

"I concur with Datuk Seri Anifah that there are children from the other communities such as among the Kadazandusun-Murut who have been waiting for soo long to get their birth certificates and as such I questioned the rationale behind the exercise made by the National Registration Department who seem to be able to provide such documents within a short period of time.

"I also call upon the authorities to seriously look into the statement by the President of the Semporna Bumiputera Bajau Bajau Association (Perbubas), En. Mansor Santiri in which he stated that “it doesn’t make sense that a Bumiputera in Semporna does not have any identification documents.” His called for a dialogue with the NRD is indeed justified and should be heeded by the authorites.

“As I have repeated many times and have clearly stated in my Memorandum which I have submitted to the Home Ministry, this is indeed a very serious matter as it really concerns the sovereignty of our country and Sabah in particular.

"The federal government should now seriously announce the setting up of the RCI, if indeed it has been approved by the Federal Cabinat, and get the commission to work immediately in order to get back the confidence of the bona fide Malaysian citizens in Sabah.

"I also urge Sabah leaders to rally behind Datuk Seri Anifah Aman to fully support him on this issues as these issues are what the majority of Malaysian in Sabah wants to be settled positively once and for all,” said Bumburing.