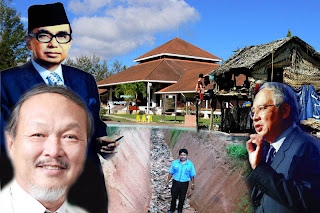 THE SETTING up of FELDA, the Federal Land Development Authority in Sabah had not been seen as helping the people in Sabah although this was established many years ago. The question was raised by the Kota Kinabalu Member of Parliament Hiew King Cheu in Parliament on the 21st March.

The KK MP asked the Prime Minister on the how big the total area in Sabah which were planted with oil palm, and the total palm oil production, and the way how FELDA can benefit the people of Sabah.

The Minister in the Prime Minister Department Datuk Hj Ahmad Bin Hj Maslan gave the answer saying that in the FELDA Plantation in Sabah is totaling to more than 103,173 hectares. The total palm oil production yearly is about 550,600 metric tonne.

The FELDA has developed many plantation areas including the associated industries related to palm oil, especially in the Lahad Datu, Tawau and Sandakan starting from the 80’s. Land development through the plantation and the industries has given much benefit to the people of Sabah directly or indirectly through direct employment or business involvement in the FELDA area or from outside.

FELDA also pays taxes to the Sabah State Government at the same time helping to raise the economy status of the local people.

MP Hiew said it will be interesting to know the details on how in the Lahad Datu 'dent Peninsular', a huge area of land around 300,000 acres were taken over by the Federal land development authority to plant oil palm. What was in the agreement of the deal?

Was it outright purchase or leased from the Sabah Government, or is it just taken over for free? May be it is time to reveal some information to the Sabahan. The question is how many Sabahan did actually benefited from this, when compared to the land were distributed to Sabahan to allow own development of plantations.

The situation could be different when FELDA is going to be Public Listed in May 2012? What will happen next? Should the Sabah be given free bonus shares? The huge production fetches huge sum of money, and where is this money gone to? FELDA made huge profit every year and where is the money spent to.