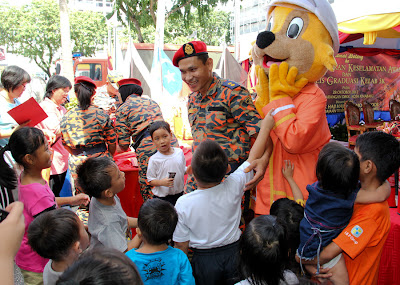 CASES of fires involving children reported in the media have been on the rise in recent times. This disturbing trend has let the Fire and Rescue Department to start an educational programme to teach young children about fire prevention and what to do when fire breaks out.

Local Government and Housing Minister Hajiji Noor was the guest-of-honour at the Passing Out Ceremony of the Kelab Keselamatan Kebakaran Kanak-kanak also known as '3K'.

This program is intended to complement the parents' primary role in molding their children so that they are more aware of the danger of fire outbreak and know what to do in case of fire.

Hajiji congratulated the organizations involved in the 3K Club activities, including the Club's teachers for their hard work and the success of this club.

According to Hajiji, a total of 406 nurseries and kindergartens,  including government and private ones have registered with Sabah's Jabatan Bomba dan Penyelamat Malaysia (JBPM) and there are 15,396 Fire Safety Club kids in Sabah.

The program targets children from preschools, kindergardens, "Tabika Kemas", "Tabika Perpaduan" and also private nurseries. The training covers theoretical and practical activities for them all year long. This is to ensure that the children are well aware of the causes of fire and know how to respond in a fire emergency.

The Fire and Rescue Department has suggested holding an annual gathering for the 3K Club so that the program will be able to give fire officials, teachers and also the local community espeially youths a chance to be actively involved in the Club's programmes, which include slide presentations, demonstrations, exhibitions and coloring contests, all at children's level. JBPM also hope to indirectly encourage the youths to join the 3K Club.

Hajiji urged the public to actively support the 3K Club. He said the success of the program's Fire Safety Campaign depends a great deal on the active participation of the community, schools, the NGOs and every individual.

He also urged parent to talk to their children about helping and appreciating the important work done by the fire department, and how bad it is to make prank calls on the emergency line 999. (Insight Sabah)
Posted by sabahkini.net at 02:12