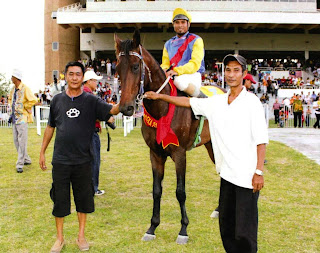 HOT….Babaero, tipped to be the hot favourite for the Christmas Cup 2010

BABAERO of LT Stable is hot favourite for the Royal Sabah Turf Club (RSTC) Christmas Cup at Tambalang Race Course in Tuaran this coming Sunday. All eyes are said to be on Babaero which had been performing well over 1,800m this year, winning the distance for the Merdeka Cup in August.

Two months later, in the Gold Cup race for mixed Class I/II over the same distance, Babaero gave a powerful run losing only a short head to Class I champion pony, Commando II.

“All eyes are on Babaero to see whether it could cap this season by bagging the Christmas Cup,” said Lim.

He nonetheless cautioned that other ponies such as Royal Chip owned by Lo Tet Phin could pose a threat to Babaero’s chance so as Myth Territory and Bongawan Prince II.

RSTC’s final major cup for the year is slotted for Race Eight on Dec 26.

Shortly after the Christmas Cup race, punters would be witnessing what could be the future for RSTC and Tambalang Race Course, the Thoroughbred Cup Race, which saw nine entries.

Lim noted that the horse tipped for this race was the winner of the maiden thoroughbred race in Tambalang last month, Lily Express of Golden Stable from Sandakan.

“Lily Express won handsomely in that maiden race on soft ground over 1,200m. However, for thoroughbreds it is very difficult to predict because anything can happen and like I said before the horse must be well-tuned and its rider on top form in order for it to cross the finishing line first,” he said.

Other contenders were the second, third and fourth place winners of the preview race for the thoroughbreds namely Century Beau of City Star Stable, He’s a Charmer from Kinabalu Stable and Kingsley, another horse from Golden Stable.

Lim said on Christmas Day itself on Saturday, the main highlight would be the Cup Race for Class 7 Division 3 over 1,800m, which is scheduled for Race Eight.

Among the favourites for this race are Butterfly, Sri Aman, Pengkalan Girl and Carry On Happy, while the other entries are Casablanca, Peluang Baru, Japo III, Jagoh, Lucky Boss, Queen Papa, Baby Girl, Jungle Master, Cris Ronaldo and Sunsulit.

“Punters should also be on the lookout because the RM12,444 pool money, which was declared no winner last week will be carried forward to any of the tri-forecast race on Saturday,” he said.

On Saturday (Dec 25) RSTC management committee had handicapped nine races, while on Sunday there would be 10 races with the last race being the Cup Race for Class IV over 1,200m.

“As we can see the races are handicapped evenly therefore punters and horse/pony racing enthusiasts could expect an exciting race not only promising handsome payouts but also sets the racing standard in Sabah to another level above,” he said.