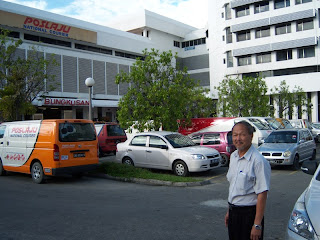 THE Kota Kinabalu general post office comes under heavy complaint on its car parking arrangement. The users of the GPO often have the problem to find an available parking space to temporarily park their cars to enter into the complex to take their parcels and letters.

The people complained that the car park in front the GPO are often taken up by the vehicles of the people working in the GPO building which includes the GPO staffs, and other GPO vehicles. The customers of the GPO have no chance to park their cars in the fully occupied car park. The situation is made worse due to some broken down post office vans were parked in the parking lots for quite sometimes now.

The users of the post office have to make rounds to just park their cars shortly, but most of the time they have to park outside risked to be summoned. It is more difficult if they have to pick up packets of parcels from the Poslaju and opening their post boxes.

Kota Kinabalu Member of Parliament Dr. Hiew King Cheu inspected the car park situation and found out that it is true that the GPO management should do something to improve the situation.

He suggested some of the operations and functions of the GPO to be rearranged and diverse to other less congested areas in KK, especially the Poslaju service. The many GPO vans and staff vehicles should not park in the car park for the whole day long and should allow customers’ vehicles to use the car parks more easily.