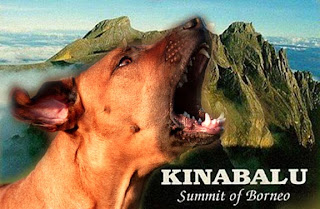 I FEEL it is heartening to note that the leaders of UPKO are vigorously voicing out the problems facing the native people of Sabah. Datuk Wilfred Bumburing had as far as preparing a memorandum to ask the federal government to nullify all illegally issued ICs in Sabah and “providing the (home affairs) ministry with documented proof” of the problem and he hopes “the Home Ministry will act accordingly to resolve this 30-year old problem.”

He has even gone as far as raising the concern about the potential danger that can arise when the illegal population exceeds that of the original local population. He said “The worst scenario that can happen is of these so-called Malaysians demand for a referendum to be out of Malaysia.” In a few words Bumburing had made another observation that gave a new meaning to the now popular ‘reverse takeover’ theory.

Senator Datuk Maijol Mahap, as Vice President of UPKO had also been voicing out a few other pro-Sabah matters, the latest being the matter of Borneonisation which remains an unfulfilled dream. And we expect a lot more to come out of UPKO in the following days and weeks, in its renewed energy to come to the defence of the original population, or natives, of Sabah. I believe the UPKO leaders’ concerns are very real and that they are very sincere and even dead serious about these long standing issues.

To their credit, the PBS leaders had also been very vocal in voicing out their deep concern about the threat opposed by the illegal immigrants. Both Tan Sri Joseph Pairin Kitingan and Bumburing had already gone on record to say that the issue of the illegal immigrants “must be resolved before the next general elections.”

Pairin, in a statement that sounded like an ultimatum, even said that it should be resolved by 2011. The problem is that the next general elections may be early next year, in which case it is very doubtful that the problem can be solved that soon. No, there won’t even be time to begin to solve it, even if the federal government has any intention to do it at all.

The problem of the illegal immigrants arises from at least two sources:

1. The federal government (which encourages, machinises and then ignores it),

2. The Barisan Nasional components which for so long had been too quiet about the problem.

Now that the UPKO and PBS leaders are making loud noises about it, the federal government has been playing the normal game of behaving like a deaf mountain. It is applying the guilty tactic of playing dumb as well – by pretending they don’t hear the complaint and normally won’t even so much as respond.

Recently, The Minister of Home Affairs, Datuk Seri Hishamuddin Tun Hussein responded to Bumburing by asking for proofs with regards to the illegals, which by itself is shocking because Hishamuddin implied that, as the Minister of Home Affairs, he didn’t know much about it although it has been the mother of all problems in Sabah, and it is one of the biggest threat to national security in Malaysia!

So now that a memo had been sent by Bumburing, there is still a huge doubt that the Home Ministry will even bat an eyelid to respond to the memorandum. As usual it will be KIVed and forgotten. But let’s remember that the memo is just to urge the government to nullify illegally issued ICs, and came short of supporting UBF’s call for a royal commission of inquiry to investigate the problem.

Because of the attitude of the federal leaders, the problem will continue to drag on for many more years. No amount of dire warnings such as high crime rate, health threats, reverse takeovers, demand for the UN to give Sabah independence from Malaysia, etc. will get the federal government to even do anything, except to make lame excuses and ‘positive’ assurances to allay the fears of Sabahans. It was interesting that Bumburing’s story came out the same day as the news of the freeing of the Abu Sayyaf hostages from Sulu.

So what are we to do? I believe that the only way to solve this problem is not to continue making noise, or to try “to create change from the inside”. The effective, once-and-for-all solution is to change the government, to topple BN out of the picture. Or at least to chase out UMNO from Sabah!

The KDM leaders in BN must begin to understand that as long as they are inside the BN, they are in fact supporting the BN, and accepting everything that the BN does and doesn’t do. They can protest all they want but in fact they are part and parcel of the corruption. And sooner or later they will be seen as having crossed the line and action will be taken against them. Upko has been accused of being a rebel BN component before…

So how do we get out of the mess? The answer is very simple – we Sabahans need to gang up together and say enough is enough! Let’s stop bowing to UMNO and the BN! Let’s sacrifice all those favours in the forms of salaries and allowances, positions and project awards which all amount to nothing but for self-enrichment at the great expenses of the poor Sabahans.

Just because the leaders are enjoying these favours (which were designed to soften them into ‘Yes Men’) they are putting their own people of Sabah and Sabahans to a bleak future. In fact the bleak future is already here. We are living with clear proofs of shattered hopes and broken dreams! We are now surrounded by immigrants, not just in the towns but in the interiors as well.

But thankfully, now we have a new vehicle: United Borneo Front (UBF)! I believe it is worth taking note that of all the political formulas created for Sabah and Sarawak since 1963, UBF is the most realistic and powerful in terms of ideology and vision.

Born out of the mind and the long struggle of Datuk Dr. Jeffrey Kitingan, UBF is powerful because it encapsulates the dreams and aspirations of the Borneo states. And because it aims at recapturing the original form, promises and ideals during the genesis of Malaysia, it is the perfect vehicle for all local Sabah-based parties to regain the promised rights and autonomy of Sabah and Sarawak.

The only reason why no BN leaders even said the slightest comment to put down UBF since its announcement on 16th December is because the rationale of UBF is so true and so attractive that no Sabahan or Sarawakian in his right mind would deny it is a brilliant idea.

It would be unthinkable for a Sabahan to say, “No! I don’t want Sabah to have itd rights and autonomy as promised in the 20 Points!” Only Datuk Masidi Manjun made a comment about Dr. Jeffrey’s not having done it for the last 30 years, but he didn’t say UBF was a bad idea. In any case, Masidi is wrong; Dr. Jeffrey had been vilified, slandered and even gone to jail trying to fight for our rights!

The KDM leaders of the BN components must rethink their positions and ideology as politicians and ask themselves what they are really fighting for. They must examine themselves if they are doing everything to ensure the survival and progress of their own people.

They have two simple choices:

1. To continue supporting the BN and perpetuate the problems for Sabah, or

2. To join the UBF and change our future. For reminders, the seven-point agenda of mooted by Dr. Jeffrey for UBF are:

1. To establish a compliance mechanism to the Malaysia Agreement 1963, especially Article VIII (8);

2. To ensure fairer revenue-sharing formula and representation at the federal level;

3.To restore Sabah and Sarawak status as equal partners in the federation;

4. To protect native rights as enshrined in Article 153 of the Federal Constitution;

6. To narrow the economic and digital divide; and

7. To resolve the immigrant problem in Sabah. These are simple, straightforward, real and compelling motivations for us to stand up for what is right.

UBF is the new and exciting Window of Opportunity (WoO) that should be wooing the leaders of the BN in Sabah and Sarawak to come forward and affect real and lasting change, not by default or with a short cut like the failed 16 September bid by Datuk Seri Anwar Ibrahim, but through the 13th general election.

UBF is the best vehicle for us, natives and non-native parties and NGOs, to speak with one voice and move in one direction to free Sabah of federal oppressions, to fight for justice, to reform our society into a genuinely progressive society.

Note that Dr. Jeffrey did not come up with the idea of forming UBF as an umbrella for himself, but as a platform for all the leaders and people of Sabah and Sarawak, for change and reformation for all.

If the Sabah leaders can regroup with a determination to create real change, we can reinvent history and create a Sabah which will not only be progressive but will be so economically empowered that we can look forward to becoming an economic superpower within Malaysia, and even within the south-east Asian region within a decade or so.

It is time to take the bold steps, to speak as one voice, to look forward to a solid vision for the sake of our children’s children. We should know be feeling the return of The Spirit of ’85, and awakening to a new dawn in our history.