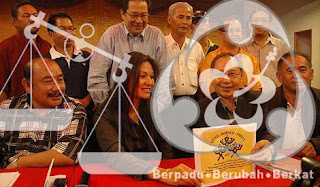 THE Barisan Nasional (BN) has been taken aback by the United Borneo Front (UniBorF) attack line last Thursday that it has failed the people of Sabah and Sarawak for the last half century. They know that the NGO speaks the inconvenient truth and there's little scope for a spin here. So, the silence from the ruling party in response to the Thursday launch of UniBorF at the Borneo Tea Party has been deafening.

Prime Minister Najib Abdul Razak had previously openly invited the Third Force to join the BN. This cannot happen overnight unless he openly apologises for the wrongs done to the people of Sabah and Sarawak since 1963 under Malaysia. This is the consensus on the ground. He must also pledge to atone for the BN's ‘evil past’ in the two states. This is the only way for the BN to redeem itself in the eyes of the people of Malaysian Borneo.

Najib has to bite the bullet. It's by no means certain that the vacillating prime minister can do this with Mahathir Mohamad breathing down his neck at every opportunity.

UniBorF's comparisons of Sabah and Sarawak with Singapore, which left Malaysia in 1965 after two years, and Brunei which stayed out of the new federation at the 11th hour in 1963, are only too glaring. So the less said about its track record in Sabah and Sarawak, the BN reasons, the better for the ruling coalition.

Meanwhile, the local parties in the Sabah BN coalition are in an extremely tight spot as well over UniBorF. While they cannot be seen as openly backing the movement, albeit apolitical, it would be political suicide at the same time to knock the aims and objectives of this Third Force NGO. Their strategy for now is the “hear no evil, speak no evil, see no evil” of the deaf, dumb and blind.

It remains to be seen how long they can get away by pretending that UniBorF is pursuing a myth and best left to its own devices. Jeffrey Kitingan plans to launch the Barisan Rakyat Sabah (Sabah People's Front), an informal lobby of all local political parties, to discuss the Borneo Agenda being mooted by the Third Force. There would be a similar movement in Sarawak and both would be under the Barisan Rakyat Borneo.

Sabah BN leaders, in any case, think that it's high time they kept a good distance from Jeffrey, the UniBorF chairperson, lest they be roped in under the Internal Security Act along with him. They are convinced that Jeffrey is heading in that direction for a second time. Those who turned up at the launch of UniBorF are beginning to regret their presence at the function since the Special Branch was there in full force to video-tape everybody.

They must have cringed in their seats and tried to make themselves look very small when Jeffrey spoke about leaders being compromised by the system. He also spoke about the climate of fear and ignorance perpetuated by the authorities in Sabah and Sarawak to deter any uprising against Putrajaya. They would not be impressed by his advice that “there's nothing to fear but fear itself” in the struggle for Sabah and Sarawak in or out of Malaysia.

However, it's anything but silence at the Sabah chapter of the Parti Keadilan Rakyat (PKR). Certain leaders, the newly-minted and the old survivors, are trying to seek or renew their relevance by latching onto UniBorF as a heaven-sent opportunity to use as cannon fodder. They see the NGO as an ‘affront’ to PKR, a Pakatan Rakyat (PR) coalition member, since it (UniBorF) was launched by the de facto party chief for Sabah and Sarawak.

Their spin comes as no surprise. Many Sabah PKR members and leaders have discovered that the quickest way to bring oneself to the notice of the public is to attack Jeffrey. The man, being a Kitingan, has only to be himself to get into more than his fair share of troubles. He invites the unwanted attention of the publicity-seekers seeking to build their own public images.

Their modus operandi is simple. The first line is to demand a public apology from Jeffrey, the second to draft a memorandum to the party president to demand that disciplinary action be taken against him, and third, to demand his sacking from the party for any number of purported infringements of the party constitution.

In the eyes of the these publicity-seekers, generally masquerading as the anti-Jeffrey Kitingan rebels, the man is guilty of bringing disrepute to the party and damaging its image in the public eye. This Samy Vellu-inspired charge is a no hoper. For the accused, once brought forward on such a charge, summary dismissal is imminent. Even the Gods can't save the hapless victim from the situation.

'Sacking Jeffrey out of the question'

It's unlikely that de facto PKR chief Anwar Ibrahim would want Jeffrey to leave the party and this is for any number of reasons. On the contrary, he would strive to keep him within the fold even if he wants to quit. So, to sack him in response to the demands of some riff-raff is out of the question, unless Anwar has lost the plot. There's always the first step when insanity sets in. Those whom the Gods wish to destroy, they first make mad.

UniBorF is not mocking the Pakatan political model but merely pointing out its limitations and has accepted them as well. Jeffrey's detractors in Sabah PKR are maintaining the fiction that he has been taking more than pot shots at the party through UniBorF and must be dealt with accordingly.

They point out that nothing was done when he launched the Common Interest Group Malaysia (CigMA) in the wake of his resignation and reinstatement last year. There's suspicion too over the real intentions of his Borneo Heritage Foundation (BHF) and the umbrella Pan-island Borneo Forum (BF).

Patently, the agenda for change and reform pledged by PR, well-meaning as they are, does not include the Sabah and Sarawak agenda. Anwar has so far only played lip service to the Tambunan Declaration on the Malaysia Agreement despite promises to include it in the PKR Constitution and Pakatan's Common Policy Framework (CPF).

Then, there are the many so-called Jeffrey supporters who see the launch of UniBorF as a great disappointment for them personally. They had come from far and near hoping that he was launching a new political vehicle which would be their ticket out of PKR.

That did not happen and they had no heart to even partake in the tea and refreshments served after Jeffrey's ceramah last Thursday. This was the Borneo Tea Party, the first of many to come throughout Sabah and Sarawak, according to UniBorF strategists.

These supporters are threatening to leave him and to have nothing to do with UniBorF which they swear will be left with only one member besides Jeffrey i.e. lawyer and social activist Nilakrisna James, the grand-daughter of the famed nationalist OKK Sedomon Gunsanad who opposed the formation of Malaysia.

Nilakrisna was at the Thursday launch of UniBorF, holding up the Murut-inspired logo of the new NGO together with Jeffrey for the press photo-shoots.

The presence of Nilakrisna at the UniBorF launch was significant in that it was belated recognition through the grand-daughter of the man whose voice was shut out by first Malayan Prime Minister Tunku Abdul Rahman. Sedomon died of a broken heart barely three years after the formation of Malaysia.