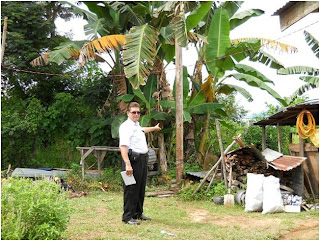 INSPECT.. Dr Benjamin yapp inspecting the site where the old, deteriorating electrical pole posed dangers and obstruction to the villager at Kg Sandapak.

The old electricity poles were planted indiscriminately along Kampung Sandapak in Bingkor SEB for many years without due consideration for the land-owners and families staying in the affected areas.

According to Sabah DAP parliamentary Liaison Chief for the Interior, Dr Benjamin Yapp, the aging, deteriorating conditions of the electrical poles had also encroached on private landed properties and posed the risks and great dangers to the residents living beneath the overhead electrical power cables that crossed over head along the roof top of their houses.

During the occasional thunder storm and lightning incidents, the families living inside the houses were exposed to dangers of being strike by lightning as the live wires hang across the roofs of some houses complained the village households.

Despite of the previous publicity of the problems by Sabah DAP interior on June 17, 2010 , but after recent inspection by Dr Benjamin Yapp nothing had been done to rectify and remove the dangerous, deteriorating electrical poles that posed dangers and obstructions to the affected villagers and their properties.

They fear that their wooden houses would be burned and lives be loss if SEB would not take responsibility to improve the conditions of the affected villagers. This was against human rights and SEB would be held responsible for any incidence of harms fire due to short circuit and dangerous live wire falling down in case of the old, deteriorating poles fell down onto their houses lamented the villagers.

Sabah DAP urged the authority concerned, especially the Sabah Electricity Board to immediately look into the plights of the Villagers at Kampung Sandapak, Bingkor that were adversely affected before any families got electrocuted and killed in incidence of heavy thunder storm during the rainy season.