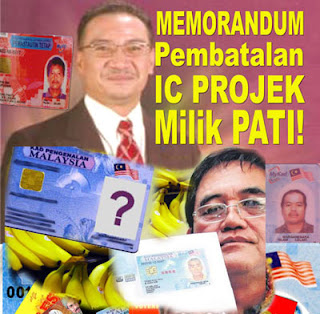 SABAH Progressive Party (SAPP) Deputy President, Datuk Eric Majimbun, said the recent displeasure by UPKO's Deputy President, Datuk Wilfred Bumburing on the issuance of documents such as Mykads by the BN-Umno government to illegal immigrants being an 'OPEN SECRET' showed that the BN government chose to ignore it well knowing it will serve them in their evil political agenda, to dominate the local people of Sabah by hook or by crook.

"These foreigners who came from the back door preferred to discard their foreign nationality and accept Malay as their race in order to be overnight citizens and obtaining full bumiputra status.

"I remembered during the Integrity Select Committee chaired by Tan Sri Bernard Dompok, who summoned the highest officer of the National Registration Department, who refused to appear in the hearing on the issuance of Malaysian Identity Cards to foreigners in Sabah. Though it could be contempt of parliament, this officer has even got the guts to reason that they have orders from their 'boss' not to appear.

"This daring act by the officer confirmed that the Federal Government had intentionally wanted the matter to be swept under the carpet.

"I personally tabled the problem and handed the photocopy of IC bearing my surname to the Prime Minister and his Deputy during the BN meeting in early 2008 but was set aside without discussion and reasoning even though it was supported by one of the local component party president. It was the last BN meeting which I represent SAPP.