LIEW VOWS TO STAY IN PKR 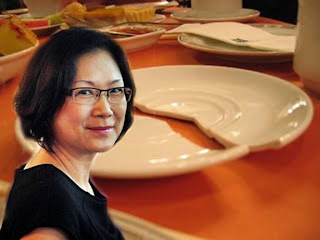 NEWLY-ELECTED PKR supreme council member Christina Liew has come forward to clarify her position in the event that Jeffrey Kitingan, her mentor, quits the party.

“I will not quit PKR although I support him and understand and accept the Borneo Agenda being promoted by him,” said Liew, who is also the Kota Kinabalu PKR division chief and state deputy chief. “It cannot be any other way on the Borneo Agenda.”

She pledged her continued loyalty to party president Dr Wan Azizah Wan Ismail “to continue my struggle for the people within PKR” while she “will look at Jeffrey from a distance if he leaves PKR”.

Liew said she had to make the clarification following a media report yesterday in Kota Kinabalu implying that Jeffrey had quit the party last Thursday and suggesting that she was on the verge of following in his footsteps.

Liew doesn't want to be linked with any report taken out of context especially since she was at the launch of the United Borneo Front (UniBorF), Jeffrey's new NGO, last Thursday.

“I did make it clear at the Likas Hospital on Monday, when I was asked by the local press, that I would not follow in Jeffrey's footsteps and leave PKR if he left the party,” said Liew.

“The report read that since he has left the party, there was a question of whether I would follow in his footsteps.”

Liew continued that it was important to make the distinction between 'if' and 'since' and the question of the latter - since - does not arise at the moment.

'Not breaking ranks with Jeffrey'

Liew hastened to add that she is not breaking ranks with Jeffrey whom she admires very much and whose friendship and guidance she cherishes.

However, she does not see how they can achieve their shared vision for Sabah and Sarawak if he doesn't have a political party and instead wants to use UniBorF to push their cause.

She does not discount the possibility that UniBorF will become a political party and in that case “it must join Pakatan Rakyat (PR) and not allow another Batu Sapi to happen”.

“It's a reality that you must contest in elections to remain relevant and in order to help change the fate of our people,” said Liew.

“I have yet to see how he (Jeffrey) can translate his vision for Sabah and Sarawak into reality. I accept the vision but what about the reality without a political party or taking part in elections?”

No matter what Jeffrey does, Liew pledged to support him “if it's in the interest of Sabahans”. She remains confident that Jeffrey will not re-join BN - “it's not his cup of tea”-if he quits PKR “and this means the opposition would not be affected by his departure if it came to that”.

Meanwhile, she will pursue Jeffrey's vision for Sabah and Sarawak within the context of PKR and the Pakatan Rakyat alliance which also includes DAP, PAS, Snap and PSM.

“I share Jeffrey's vision and dream to return to Sabah what rightfully belongs to the state under the Malaysia Agreement of 1963,” reiterated Liew.

“Sabah and Sarawak did not join Malaysia but came together along with Singapore and Malaya to form the new federation in 1963.”

The Sabah and Sarawak longhouses were demolished after Singapore's departure in 1965 as pointed out by Jeffrey last Thursday, she lamented, and both states were given bilik (rooms) in the Malaya longhouse. In short, from the status of being equal partners in a federation of three territories discounting Singapore, Sabah and Sarawak were reduced to becoming two among 13 states after 1965.

“After 47 years of independence, Sabah and Sarawak are not getting what they are supposed to get under the Malaysia Agreement,” sighed Liew.

“It's time to think of an alternative government, Pakatan Rakyat, which can make good on the promises of Malaysia for us.”

The BN had 47 years to bring the fruits of independence and federation to the people of Sabah and Sarawak, she pointed out, but has failed despite all the lobbying and appeals from the two states “because they have fallen on deaf years in Putrajaya”.

“We can no longer depend on the BN. What's their excuse after 47 years? Why do they still expect us to vote for them? They are not interested in our welfare. We have had enough of them.”

The bottom line is that the “failure of Malaysia in Sabah and Sarawak” (because of BN) has meant that both states are the poorest in the country - “poor people in rich states” - despite vast land and other resources including oil and gas, copper, gold, oil palm and other commodities.

“While Kuala Lumpur has twin towers and super highways, we have muddy roads and hanging bridges constructed during the colonial times. Our school children have to walk (several) kilometres to school.”

She suggested that the media takes a trip into the interior - Pitas, Kota Marudu and Ranau for starters - to see the abject poverty of the people for themselves. The poverty, according to her, has forced the people to flee to Kuala Lumpur and Singapore “and when they failed to get suitable jobs there, they are too ashamed to come home”.

Keningau PKR division vice-chief Dr Nicholas Guntobon, a close ally of Jeffrey, said that “an irresponsible group was spreading rumours that Jeffrey and his men (including him) had left the party”.

“Jeffrey is still a PKR member,” said Guntobon. “He has not sent in any resignation letter to PKR and neither did he say that he is quitting the party. Jeffrey will not send any quit letter to PKR.”

UniBorF, he said, “is a NGO platform for gathering the views of the people on the Borneo Agenda”.