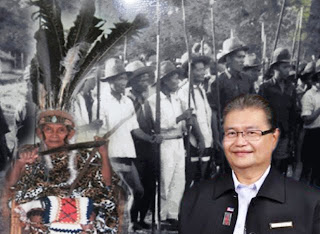 AS an academician, historian and author for ‘Gana’ Aboriginal Cultural Heritage Of Borneo’ and ‘Gana’ Native Folklores’, I have written a brief introductory account of the historical background of Borneo’s rich cultural heritage of the indigenous Gana’ Tribes of the Interior of Sabah, Malaysia that first appeared in the Sabahkini.net, a leading multi-media company in Sabah, Malaysia.

I salute Sabahkini.net for its immerse contribution on the multi-media publications with a high standard of professionalism, unbiased reports, uncensored media statements, speed and efficiency in the production and dissemination of information, news and features relating to social, economic, political and other related interests for the benefits of all readers within Malaysia and abroad.

It is for these main reasons that I have chosen Sabahkini.net as one of my favorite avenues for voicing the grievances and problems of the people of Sabah, particularly from the interior through the esteemed Sabahkini.net websites.

In this connection, I wish to congratulate and extend my sincere thanks and appreciations to Sabahkini.net on their excellent services to the public and private sectors organizations, Political parties, NGOs and individuals who have any interesting subjects or, interest to share with the readers within Malaysia and abroad.

This is indeed a bold and noble step taken by Sabahkini.net to uphold the principles of social democracy and transparency where the democratic values and basic human rights of freedom of expressions, liberty and integrity should be encouraged and held in high esteem in the true spirit of Malaysia.

PART II- The Legendary tales of the ‘Leopard Skin’ Clothing worn by the Elders or, Chieftain of the Ancient Aboriginal tribes of Borneo.

In the olden days, tree barks were made for clothing, but in the later parts of the centuries, Gana’ aborigines used skins of stain wild animals such as wild ‘ponny’ (small breed of horse found in Borneo), deers, and wild cows.

They discovered that the skins of animals gave them more warm and comfort against the cold, and wet conditions during the nights and raining seasons. The native headhunters wore the animal skins to protect them from cold and poison darts of their rival enemies in the wilderness. It was also a protective clothing against insect bits in the tropical forests.

The tales of chance meeting with leopards in the deep jungles of Borneo when the Gana’ native hunters encountered wild leopards during their hunting trips. It was the wild, fierce leopards that had killed and eaten some children and elderly Gana’ who happened to wander in the deep, dark forests.

During that particular incident, a few hunters panicked and flee the scene to avoid dangers but only the brave, and toughest of the Gana’ tribes stood to fight against the leopard. The strongest and bravest Gana’ hunter killed the Leopard with his primitive weapon.

When the news broke out to the Gana’ community in the interior communal village, the brave native hunter was made a Chieftain and wore the leopard skin as a symbol of his bravery, strength and might in the ancient arts of warfare. In later years, the leopard skin clothing was worn as a traditional costumes for the Gana’ aboriginal tribes. 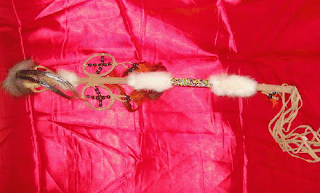 This ancient tribal ritual object is the symbol of authority and power of the Chieftain. It symbolizes the interconnection of pagan tribal culture of the Gana’ aborigines, and it was believed to have super-natural power and mystery.

It could send curse to the rival enemies and ward off evil spirits. It must be handled with respect and dignity, or else one would be cursed, and sudden illness and mysterious danger would befall the one who shows disrespect and dishonor to the ritual object. 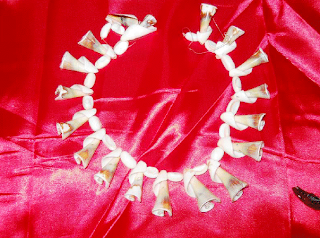 ‘SALID SUSU’ made of ornaments of shells made of shells of rare species of white river snails harvested from streams and rivers in the virgin jungles in olden days.

According to the Gana’ pagan belief, it was believed that each typical shell had to be harvested with careful selection and ritual performance as the pagan tribes believed in superstitious phenomena and pagan worships.

The bead had a significant meaning attached to it, and by collection of certain numbers, it would bring good omen, lasting health and protection to those who wore the ritual ornament. 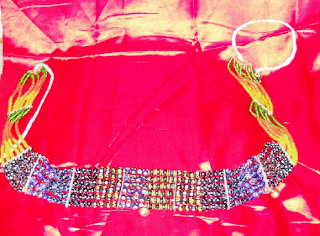 It was used by Gana’ aboriginal women as accessory for ceremonial. 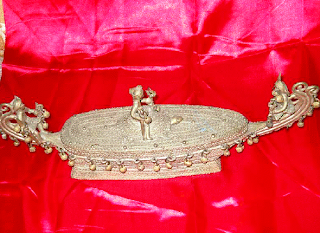 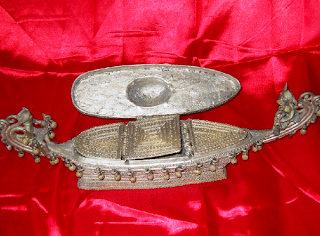 ‘SALAPPA’ antique Jewelry box of regalia named after its maker, the late Salappa, who came from Cambondia. In the language of the Atayal in Cambodia, SALAPPA means Blacksmith. According to the old folks of Keningau, Sabah it was a gift from the late Aki Sultan Bin Aki Barunai, a sub-ethnic of Gana’ to His Royal Highness Baginda Seri Sultan Balungan during his official visit to Negara Bungan as it was known as locally or, Garuda as it was called in Indonesia and in Malaysia as well.

The Salappa was adapted as the official regalia of Pulau Barunai, later named after Christopher Columbus as the Island of Borneo. The history took place between 1011-1026. This antique item said to be around 1025 when it was discovered in the interior and kept by the Gana’ elders until this very day.

The history was long and complex. However, due to a series of happenings in the past, the Salappa was brought to Keningau in 1022 ( Refer to File photo of ‘Salappa’).

It was considered a price-less treasurer kept by the generations of Gana’ elders. The copper ornamental box was hand-made and was once a procession of Sultan Bulungan from the Region in Bulungan Regency in Northern part of the province of East Kalimantan.

The elders claimed it came from the ancient palace of the Sultan of Bulungan in Kalimantan. How the ornament travelled that far from Kalimantan to North Borneo (formerly, Sabah) in the early days was unclear.

The theory was that in the 17th Century on wards, the merchants from China and sea-farers such as tausug (suluk), as well as Bugis from Kalimantan Borneo, Southern Philippines, and the tiny tropical islands of Sulu and South China seas travelled on lands and seas to reach North Borneo in the early days. Gana’ aboriginal tribes like other pagan tribes such as dayak, iban in the olden days were also normadic tribes from the interior of North Borneo.

They also traded their jungle produces and herds in ex-change for ‘treasures’ such as copper wares, weapons, ornaments and the like. It was believed that this ‘Salappa’ ornamental copper box was obtained through the olden ways of barter trade, which had been popular trade exchanges between Indonesia and Sabah to this very day.

Perhaps the Salappa was later given to the Chieftain of the Gana’ aboriginal tribes as a gift. That concluded my preliminary findings on how the Salappa got into the hands of the Gana’ indigenous tribes of North Borneo in the olden days during the British North Borneo Chartered Company (1881-1937). 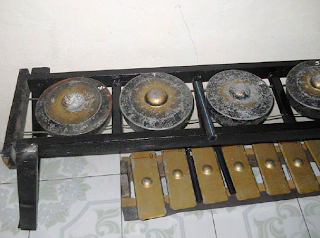 ‘KULINTANGAN’ is an old copper set comprising of mini ‘gongs’ musical instrument used to be played by the Gana’ old folks at their native communal huts. It was believed to be over a century old.