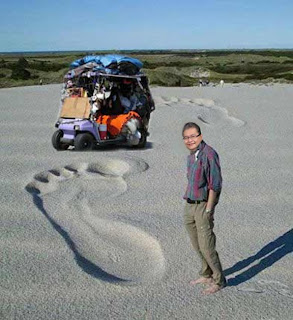 The Seven-eyed ‘Jin’ known as the Borneo Big-foot is a tale of long ago, about a distant land beyond the tropical hills and mountains, a beautiful land below the wind- Borneo where there lived a giant big-foot or ‘Wild Man Of Borneo’ but it was not an ordinary wild human-like creature, it was a mysterious seven-eyed ‘jin’ with a thick, coarse wire-like hair. It lived in the deep, tropical jungles of Borneo.

This strange hairy creature of the wild known as ‘Big Foot of Borneo’ lived like a hermit in a cave found in the interior, deep in the virgin jungle of Borneo. It ate wild fruits and hunted for wild beasts in the forest, using an ancient tool, made of stone.

One day, the tired Big-foot took a rest under a huge, jungle tree after a heavy meal of wild-deer. It felt asleep under that giant old tree surrounded by the green undergrowth.

A group of Gana’ native hunters happened to be around the same place, looking for wild game to hunt. All of a sudden, one of the hunters spotted the mysterious Big-foot, sleeping soundly under the tree.

The Gana’ native hunters got excited to see such a strange-looking human-like creature. They shouted in their primitive native tongue, translated in English, thus, “ careful! It’s a giant Big-foot! Kill it at once!”.

They tried to kill it with their primitive deadly blow-pipes using poisonous darts.

After they shot it with seven darts, the big foot fell flat to the ground and was killed by the hunters. One of them cut off its head while the others took its hair.

They went home to their village that evening with the head of the ‘jin’ with seven eyes and hair to celebrate their victory with the bitting of ancient ‘tagunggak’ (an ancient bamboo and native gong orchestra music) usually meant for ceremonial, victory or, ritual.

After the brave hunters brought home its head, they examined it carefully with curiosity. They were shocked when they noticed its ugly head had seven-eyed cavities and that its untidy hair was thick and coarse like a wire.

The elders in the village performed a strange native ritual for the spirit of the dead ‘jin’ the following night.

When the ritual ceremony was over, suddenly they realized that the mysterious creature had a supernatural power. They had a strange, frightening experience with its remains.

The head of the ‘jin’ was placed inside a small hut, lighted with several oil-lamps burning into the dark, cool night.

This legendary folklore was handed down by the Gana’ forefathers from generations to the present-day ‘Chieftain’. The skull of the ‘jin’ with seven-eyed cavities and its strange wire-like hair are currently kept in custody with the legendary chieftain of the Langkap’s family.

It is said that the mysterious skull and hair of the ’jin’ have strange power to cast evil spirits or, protect one from dangers and harms. It must be handled with great respect and care.

The writer has a privilege to keep a hair of the ‘jin’ and he once experienced a strange phenomena when spinning ceiling fan suddenly fell over his neck region after having obtained the hair of the ‘jin’ kept at his bed room for seven nights that saved his life.

The blade of the fan suddenly fell over his head and hit directly at his neck region, but there was not a sign of physical injury! Believe it or, not, the writer has a wonderful story to tell.