THE GLIMPSE OF THE INDIGENOUS GANA’ TRIBES 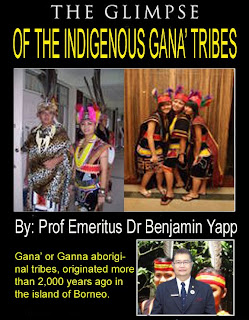 Prof Emeritus Dr Benjamin Yapp conducted a research into the historical background of the traditional cultural heritage of the indigenous tribes of the Gana’ communities in the interior of Sabah. He discovered that this particular indigenous tribe of interior whose ancestors existed over two thousand years ago in the deep interior jungles of the tropical island of Borneo.

The British North Borneo Chartered Company had inadvertently left out the minority ethnic race of the Gana’ natives as one of the indigenous races of North Borneo (Now, known as Sabah) in 1882. Until the present days, the Gana’ communities have been classified either as Dusunic or, paitanic race in Sabah. Some claimed that Gana’ tribes had similarity to the Murut tribes as evidence from their traditional costumes and headhunting practice in the olden days as well as their social communal lives. Many of them are now referred to as ‘Dusun-Gana’, mainly located in the interior of Sabah, Malaysia, particularly in Bingkor, Apin-Apin, Keningau District, Tenom, Beaufort, Sepitang, Menumbok and the remote areas of the interior districts.

The ancient aboriginal Gana’ tribes had a long history but the written historical reports were not made until 1882 (vide Witti’s Diary dated March 26, 1882). Gana’ aborigines belonged to the Pagan tribes of North Borneo and traditionally, the men were fierce warriors and headhunters.

Gana’ or Ganna aboriginal tribes, originated more than 2,000 years ago in the island of Borneo, were only known to a few early historians and authors like Dr. Charles Hose (1863-1929) and William McDougall (1871-1938) authors of ‘Pagan tribes of Borneo’ wrote accounts of pagan tribes of Borneo and headhunting. Charles Hose (1912) wrote an account of his observation of headhunters of Borneo in the deep steamy jungle of Borneo and witnessed Borneo’s headhunters of shrunken smoked heads of slain enemies in the jungles of Borneo.

In the 1882 censorship by the British North Borneo Chartered Company, the population of Gana’ was approximately 1,487, found mainly in the interior of North Borneo (Now, known as Sabah).

According to historical and archaeological reports (1882-1900s), Gana’ aboriginal tribes had existed long before the other native races and immigrants from other countries and places in South East Asia. There were approximately 2,000 Gana’ or, Ganaq Minansut natives according to a survey held in 1985 (vide internet information SIL 1985). Today, however through mixed and inter-marriage with other native races such as Dusun, Murut, Rungus of the interior that the original ‘pure’ Gana’ natives are left with a couple of hundred population.

In 1882, the British North Borneo Chartered Company recruited the Gana’ tribes in the Police Constabulary for their loyalty, bravery and trustworthiness. They were also engaged as domestic servants by the British Colonial masters.

The legend of the ancient native warriors and headhunting in the dark ages in the deep tropical jungles of Borneo in the interior was well-known fact among the Gana’ elders but the old generation of the Gana’ tribes had passed out, and the new generation of Gana’ decendents have little knowledge of the history and legends of the ancient Gana traditional arts and culture.

There were many interesting Gana’ folklore that the readers could read and appreciate the legendary tales such as ‘The Seven-Eyed Jin (Big-Foot) Of Borneo’, the fairy tales, the mysterious devilish Bird, the curse of the demon, the head-hunters and ancient tribal wars, the ancient ritual and ceremonial, the tribal council, the magical spring, the many mysteries of the wild, tropical jungles of Borneo, etc.

Dr Benjamin Yapp had authored a folklore for children and readers in the e-book titled, “The Mysterious Seven-eyed Big Foot of Borneo” with illustrations. Interested readers may request for a copy via email address: sabahdapkeningau@ymail.com

The traditional costumes of the Gana’ tribes are very colorful with beautiful hand-made embroidery of stylized aboriginal artistic motifs, bright colorful patterns of leech-like, zig-zag, shapes of leaves and abstract art of human-like designs on the textile costumes. The head-dress for both male and female consists of beautiful, colorful motifs and colorful features.

Usually peacock neck feathers are worn by the Gana’ tribes during ritual, and ceremonial. The warriors dressed in leopard skins and furs of wild animal slain in the jungles. The Gana’ warriors carried a long sword with a handle filled with human hair slain from their enemies during the days of the headhunting in the jungles of Borneo.

However, albeit each tribe spoke in different native dialect, but the two races practiced many similar traditional cultures and musical instruments such as playing bamboo musical orchestra and gongs during ceremony and ritual ceremonial. These two tribes also drink traditional brut natural rice wine or ‘tapai’.

Prof Emeritus Dr Benjamin Yapp has volunteered and endeavored to promote the cultural heritage of Gana’ society. He encourages the rural youths of the interior of Sabah to participate in the cultural activities as part of the envisaged ‘rural youth cultural development’ program in co-operation with the Gana’ Society association, aimed primarily to encourage youths to appreciate and preserve the rich cultural heritage of the oldest aboriginal tradition of Borneo as well as to cultivate youths for creative arts and cultural, leadership and entrepreneurial development so to eliminate social ills and undesirable vice-activities among the youths of today.

The writer has a vision towards contributing in the future development of a healthy, useful and resourceful society for the rural youths to be future leaders in time to come.

According to Dr Benjamin Yapp’s research, the Gana’ aboriginal culture that is gradually disappearing, is one of the richest native cultural heritages in Borneo. Unless the indigenous traditional culture of Gana’ is preserved, the future generations of the indigenous Gana’ tribes are now in the danger of extinction.

Albeit the Gana’ aboriginal cultural heritage has survived for a very long time from one generation to another, it is now in the risk of gradual extinction unless the authorities concerned and the United Nations Educational & Scientific Organization (UNESCO) come to their aid to save one of the oldest indigenous traditions of Borneo, if not one of the World’s indigenous Arts & Cultural Heritages from total extinction.

The elders of the Gana’ indigenous tribal community had kept the old tradition and cultural heritage alive by passing their knowledge, legends, folklore, arts, rituals, and cultural performances from one generation to another.

Many of their elders had passed away, and managed to leave behind the antiquities for their off-springs to protect their old cultural materials, sacred, significant sites, and ancient traditional objects as well as ancient archaeological artifacts and old treasures from destruction and disappearance in the course of time.

During the olden days where headhunting was practiced by the pagan tribes, the Gana’ warriors kept the smoked skulls of their slain enemies for display to prove of their strength, bravery and tribal influence as well as placed in their ancient dwellings for decoration and use during ritual and ceremonials.

He would focus on international attention on the problems and factors that constitute to the dying of the ancient culture of one of the oldest aborigines in Borneo. Since time immemorial, the aboriginal tribal culture of this particular tribal race had survived but there is evidence of the cultural heritage gradually disappearing as the younger generation and individuals have become modernized and sophisticated in their social, economic and political development over the decades. There is less emphasis and interest focused in the traditional culture and this has resulted in the gradual extinction.

The Malaysian Tourism Board has been notified about the Cultural heritage of the Gana’ indigenous society but so far, no positive actions have been made to provide any forms of assistance. The State Government of Sabah, Malaysia has not granted any assistance or, grant to develop it into one of Malaysia’s cultural heritages.