I NEVER 'SHUT UP' UNTIL PROBLEM SOLVE! 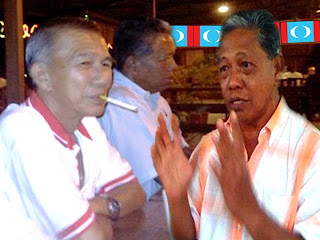 TO the crew of Sabahkini.net, if you are kind for me to clarify some doubts on Piramli who claimed himself to be the 'Legitimate’ (Sah) as Branch Chief of PKR Semporna!

Mr. Piramli, I understand that this clarification is not issued by you but, your USNO/UMNO proxies! You are just a ‘Puppet Chief’. Sorry to call you that.

You claimed yourself to be the 'Legitimate' Branch Chief of PKR Semporna and claimed that I have been silent over your proclaimed.

I have few questions which I would like you to clarify. Actually, I am honoured to be named by you as I am not famous and a Chinese with only 264 votes in 2004 election as independent candidate and yet you don't forget to name me as being quiet. Thank you for putting up my name.

Back to PKR business, which I would like you to clear the doubts of all the PKR members and public of Semporna.

2) Votes announced by SPR of PKR all sumed up to 300+ and upon counting the Youth, Women and Committee all met the sum, but the Branch Chief votes turned out to be 500+. Where did the almost 200 votes come from? Do you mean PKR Branch of Semporna has 'Phantom' votes?

3) If you really sure you win the Branch Chief, why are you so afraid to have a new round of process of ‘Re-Vote’? Lacking of fund or no chance to make up extra vote by your USNO/UMNO proxies?

4) Who is really the 'pure' members of PKR? When did you join PKR? Before joining what was your post in BN?

5) If I am no important to you, why I was asked to join the 1st meeting by your USNO/UMNO proxies using the topic 'For The Future Of Bajaus In Semporna' but, when upon the meeting the whole thing discussed was on coming PKR election?

6) I had been insulted by your USNO/UMNO proxies that I was unknown in Semporna just an ordinary guy with votes only 264 during the 2004 election as 'Independent candidate’ and yet, I was the only Chinese to be invited to attend the so call for the future of Semporna Bajaus meeting but only touched on the election of PKR why?

Still many-many questions on my mind but, I understand you will not able to answer 'cause everything is done by your USNO/UMNO proxies, you are only a 'Puppet' (patung)!

Please, ‘Repent’ (bertaubat) because you are being 'played' or 'used' by someone who has or have their agenda! I understand you are innocent. If you take me as a friend, here is my advice for you. Keep distance from these guys or you will be cursed by most Semporna people!