WHEN SMK NABALU GOING TO BE BUILT? 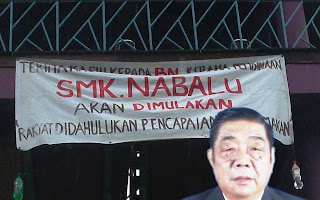 SABAH DAP Tuaran Chief, Peter Liew Fui Ken felt puzzled and surprised by the announcement made by the Tuaran Member of Parliament Datuk Wilfred Bumbering that the SMK Nabalu will start work next year, Liew said it looks like this time will be just another announcement only and can the work really be commenced?

Liew said the said school project in Nabalu which is situated half way from Tuaran to Kundasan was promised by the government many years ago and it remains as an ‘empty promise’.

The old banner hanging high up on the location in Nabalu is dated back in year 2007, and until today it is still hanging high and flying. This is a reminder and a living example to the people that how the BN government kept on telling lies and empty promises to secure their continue support from the people in order for them to stay in power.

There must be something seriously wrong on why the SMK Nabalu did not commence over these many years after the launching announcement. The people there felt very much let down and disappointed to the BN government for not fulfilling their promise.

They all said it is time to support for a change in the government to bring about an overhaul in the system and let some new blood to run the Sabah government. May be we can see some hope, new direction and brighter future. BN is too long in power and became very proud and always take the people who voted for them for granted.

Liew said Sabah is always being left as exploited and being made use of by the federal BN, we are not getting our fair share and treatment under the Malaysia agreement. How long the Sabahan can continue to bear with these ill-treatments? We are being ‘sucked dry’ and our resources are drained to the last drop.

Our future is not good. We must do something before it is too late and the only thing for the Sabahan to do now is to change the government for a Pakatan Rakyat government, and do not be misled by those small parties in Sabah to allow them to split your votes.