MANY SIDES TO JEFFREY ‘QUIT’ STORY 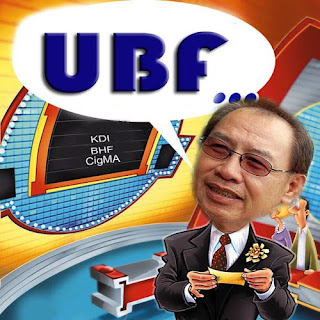 SEVERAL activists within the so-called inner circle of de facto PKR chief for Sabah and Sarawak, Jeffrey Kitingan, were visibly surprised and shocked when he did not announce his widely anticipated resignation from the party on Thursday. They had expected him to drop his ‘quit’ shock bombshell in conjunction with the launch of the United Borneo Front (UBF), an NGO, at a Borneo Tea Party hailing the advent of the third force.

The Borneo Tea Party was inspired by the Boston Tea Party of 1773 which sparked the War of Independence in the 13 colonies of the fledging United States of America along the eastern seaboard.

Frankly, the Sabah PKR activists had no business to be at the Borneo Tea Party, uninvited, to drag their political party into the picture just because Jeffrey was there as well. UBF has nothing whatsoever to do with PKR. They completely misread the situation and tried to hijack an NGO event for their own hidden political agenda, if any.

One Sabah PKR activist claimed that at a Common Interest Group Malaysia (CigMA) meeting on Thursday at 12.30 pm, Jeffrey had confided in them that he would quit PKR in the afternoon.

It’s unlikely that Jeffrey would drag a PKR issue into a CigMA meeting. He’s very careful in such matters. The meeting was to discuss participation in a Hindraf Makkal Sakthi seminar in Kuala Lumpur on Jan 23 on the plight of the marginalised communities in Malaysia.

The Sabah PKR activists had tipped off the press on the so-called Jeffrey resignation on Thursday and had even planted speculative stories along this line in Bernama, the national news agency, and various media. Wishful thinking and living on hope took a whole new meaning. The text messages circulated in their several hundreds, if not thousands, insisted that UBF was Jeffrey’s new third force political vehicle and his ticket out of PKR.

Meanwhile, to ease the intense pressure on him, Jeffrey told Malaysiakini in Kuala Lumpur on Wednesday that he was not quitting PKR the next day. He would focus only on the Borneo-based Third Force–UBF–during a scheduled ceramah and press conference.

The Malaysiakini report drew an immediate challenge from a former Sabah PKR Division Chief, now suspended for being involved in the abortive Parti Cinta Sabah (PCS). “You want to bet? Jeffrey will quit on Thursday. He will not tell you guys things that he will only tell us.” But why would Jeffrey want to quit from PKR at a UBF function?

Earlier, these renegade elements in the inner circle reportedly “convinced” Jeffrey: “You just say that you are quitting PKR to focus on UBF.” This was despite the man himself pointing out that his new vehicle was apolitical and that PKR should not be dragged into the picture. Besides, being ad hoc-like Hindraf Makkal Sakthi, UBF would not seek registration.

Even the Special Branch (SB) got carried away in the process, and was confused. It decided to have coffee with Jeffrey on Thursday morning to find out “what was really cooking”.

The SB had always maintained a keen interest in Jeffrey since his Internal Security Act (ISA) detention days in the early 1990s over a purported plot to pull Sabah out of Malaysia. This would have been no mean feat had Jeffrey had really managed to pull this off, as alleged by former prime minister Dr Mahathir Mohamad, and there would have been no UBF and no Borneo Tea Party on Thursday.

After the resignation failed to materialise on Thursday, some “Jeffrey people” were seen visibly teary-eyed, openly consoling each other by saying: “He (Jeffrey) did not want the media to write the quit story and ignore UBF. It (the resignation) will come soon.” The new rumour planted in one media is that Jeffrey would quit PKR within the next 48 hours. But resignation as to what purpose, it’s by no means exactly clear.

The Borneo Post, the only one, even reported on Friday that Jeffrey had quit PKR to focus on UBF. That’s not what Jeffrey said at the press conference on Thursday. In the face of persistent questioning by the media, his take was that he did not send in any resignation letter and that if he quits he would do so to tell them nicely why he’s doing it. That’s what he did late last year when he quit the party but was persuaded to come back after his resignation letter was reported by the media the day after he submitted it.

Another rumour is that he would quit PKR if he’s not appointed Sabah PKR state chief on Dec 18. Jeffrey has already made it openly clear that he was not interested in the post or being vice-president again. He just wants to be left alone.

One visibly angry Jeffrey man stood behind the reporters during the UBF press conference, instigating them to focus their questions on PKR. He egged them on quietly: “Stupid old man! What third force? It’s just nonsense. Also, what’s this UBF?”

Another remark for the reporters to hear: “Tell him to go and kiss (de facto PKR chief) Anwar Ibrahim’s ass.”

The reporters, perplexed by this very unDusun open display of rebellion, ignored the remarks after Jeffrey responded to the first question on PKR: “You are asking the wrong question.”

The press, including several TV media from far and near, was visibly disappointed as well that Jeffrey did not quit PKR and dashed their hopes for a screaming headline. They were less interested in the third force and UBF but more focused on a Jeffrey resignation from PKR.

But having come sometimes from a considerable distance, the reporters could not go back empty-handed and face their editors without a story. They therefore reluctantly focused on UBF which they could not grasp fully in all its abstract, complex and sophisticated dimensions.

The third force of UBF was too nameless and faceless for their liking. They probably did not listen too attentively either during Jeffrey’s hour-long presentation on UBF, to facilitate the third force, and were just waiting patiently and naively as it turned out, for their ceramah misery to end to pop the quit question.

A timely press statement and a hand-out on UBF, in any event, saved the day for them and they beat a hasty retreat, not even stopping by the buffet table to partake in what would be the first in a series of Borneo tea parties.

Jeffrey has explained, during his UBF ceramah, that the current political system and the two coalitions in the country–Pakatan Rakyat and Barisan Nasional (BN)–and the political party system had all miserably failed the people of Sabah and Sarawak. They, and any new political party, can only continue to fail.

This is where a Borneo-based third force comes in to educate, inspire and motivate the people into political action. UBF is the unstructured nucleus, the third force, the nameless and faceless cluster which cannot be manipulated and which will bring pressure to bear on the legislators, that is, Pakatan and BN.

The pressure will be on both BN and Pakatan to listen to the voice of the people in Sabah and Sarawak and reverse the re-colonisation of the two states or suffer the consequences in the likely event of a hung Parliament.

Hence, in Jeffrey’s estimation, it does not make much sense to go from the frying pan (PKR) into the fire (new political party or BN). He probably prefers to put out the fire to let the pan cool.

Again, the bottomline is that the political system and the system of political parties have failed the people of Sabah and Sarawak.

Quite a number of Jeffrey’s people: “we must fight for our rights” are all gung-ho for a new political party, that is, either take over an existing political party–the Sabah People’s Front (formerly Bersekutu) and Setia have been mentioned–or set up a new vehicle. This is not about Jeffrey, according to them, but the next generation.

They can only think of a formal organisation and structure and want Jeffrey to spearhead a new party and gradually call it quits. These were among the very people who initiated the abortive PCS which caused no end of upheaval in the Sabah chapter of PKR.

Jeffrey wants to think outside the box and remains confident that the people will go along with him to put pressure on Pakatan and BN. Tell that to the people around him who can only think in terms of seats, candidates, elections and projects and have the almighty ringgit sign in their eyes.

There’s also hope in Umno circles that Jeffrey’s exit from PKR will lead to the collapse of PKR in Sabah and Sarawak.