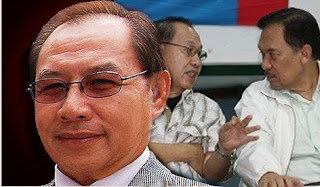 Those who saw Jeffrey and his most trusted lieutenants meet with the Dundang and his team said they were exploring possible partnership in their political struggle for the future of Sabah and Sarawak.

Jambun, Awang Sah and Iking were suspended late last year by PKR for their involvement in an attempt to register a PKR-breakaway Parti Cinta Sabah (PCS).

With Edwin were SNAP deputy president, Kebing Wan, secretary-general Edmund Stanley Jugol, and SNAP chief coordinator, Paul Kadang, who resigned as one of the national PKR deputy secretary-generals in September.

SNAP is officially a component member of Pakatan Rakyat.

Insiders said Jeffrey and his supporters are set to ditch PKR due to its non-committal attitude over demands for greater autonomy for its Sabah and Sarawak chapters.

Jeffrey has argued that the two East Malaysian states should be granted greater autonomy as agreed in 1963 when Malaysia was formed by the then Federation of Malaya, Sabah, Sarawak and Singapore which eventually left in 1965.

FMT reliably learned that the SNAP team fully supports the move to set up UBF as a common platform to pursue a Borneo agenda and has also proposed further collaboration.

Leaders from both teams refused to comment on their talks but one said there would be more meetings between the two parties.

The two together with former PKR leader, Zaid Ibrahim who has formed a new party called Kita may be moving to from a coalition and work with other groups like MCLM to eventually become a 'Third Force' or a third alternative to Barisan Nasional and PR.