EC TO BE SUE OVER NON-VOTING RIGHTS 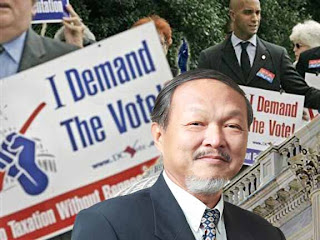 A group of overseas Malaysians demanding voting rights for all citizens living abroad are planning to bring the Election Commission (EC) and the government to court.

My Oversea Vote (MOV) International Coordinator Andrew Yong said that the group is looking to file the suit in the first half of 2011. MOV is a campaign that was recently kicked off in London and aims to encourage Malaysian living or working abroad to vote and exercise their rights as a Malaysian citizen.

It is raising funds to legally challenge the ‘discriminatory’ regulations preventing many Malaysians overseas from registering themselves as ‘absent voters’.

“We want the court to declare that the Malaysian government and the Election Commission cannot discriminate against the citizens abroad from voting on arbitrary ground and we want the court to confirm that current regulations are against the Article 8 of the Federal Constitution, which guarantees equal treatment and right for all citizen under the laws”, said Yong.

Under the Election (Registration of Electors) Regulation 2002, only members of the Armed forces, public servants, students on government scholarships and their spouses living overseas are eligible to register and vote as ‘absent voters’.

There are estimated over one million Malaysian are living and working outside Malaysia and this could potentially provide an 8 to 9% increase in the total eligible votes if they are allowed to cast their vote overseas.

Dr. Hiew the KKMP had previously brought up the similar issue with the EC and the answer he got in reply was just that the EC will look into the matters and will try to figure out a way to proceed to allow oversea Malaysians to exercise their voting rights.

The MP further pointed out that it is the right of the people who are overseas to vote as ‘absent voters’ protected under the Article 8 - Equality, of the Malaysian Federal Constitution which clearly states under clause 1 that “All persons are equal before the laws and entitle to the equal protection of the laws”, and clause 2 that “there shall be no discrimination against citizens on the ground of religion, race, descent, place of birth or gender in any law”.

Dr. Hiew advised the EC to allow the Malaysian overseas to register as ‘absent voters’ and to make arrangement for them to vote and exercise their rights as a Malaysian citizen. If other nations can do that by allowing the citizens to vote in Malaysia, we don’t see why Malaysian government cannot do the same.