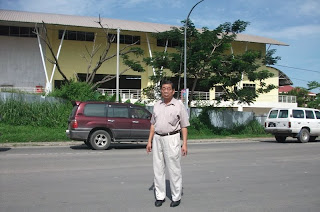 DAP in Tuaran two years ago made a complaint about the long overdue completion on the public hall which is situated right in the Tuaran town centre. Very unfortunately until today the hall is still showing no sign of its completion and the work seems stopped and the whole site is at stand still. No work can be seen on going. Last time the government promised an early completion date to allow the people in Tuaran district to use the hall.

Peter Liew Fui Ken, the Sabah DAP Tuaran Chief said that the government is not giving a full effort to get the hall completed as soon as possible. May be the reason is due to the availability of fund that caused the contractors to stop, or is it for other reasons?

The hall is indeed very important for the people in Tuaran, and it is high time to get it completed, so that there is a place for them to carry out their function.

There are other projects in the Tuaran District that also needed much attention and we see that there is problem for the BN government to even get them completed in time. This created much dismay and suffering among the people who are waiting to use the facilities. A good example is the long overdue completion of the SMK Nabalu towards Ranau.

Peter Liew wants to know when can the government be eventually able to complete the Tuaran Dewan? We can not wait until the next general election for a ‘Good News’ to be announced to fish for votes then.