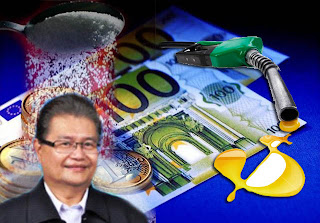 The increase in prices of fuel and sugar recently by the Government have adversely affected the people of Sabah. Sabah DAP Parliamentary Liaison Chief for the interior, Dr Benjamin Yapp received many public complaints from the people in the interior and other towns in Sabah of their grievances and hardships due to the indiscriminate increase in the prices of fuel and essential commodities.

Already, the current economic recession has hit hard on the people, and there have been widespread unemployment problems and many businesses have closed their doors or, went into bankrupcy. The general public are in a dilemma with poverty increasing everywhere in the interior and urban areas of Sabah.

Now the bad news came with rising prices for sugar, milk, Nescafe, Milo and many other essential commodities that have again forced coffeshops and restaurants throughout Sabah to increase prices for hot drinks and food sooner.

We do not blame the coffee shops abd restaurant associations for raising the prices of food and drinks, but the Government should reconsider to lower the prices of fuel, sugar and other essential commodities in order not to burden the people.

It was reported in the Daily Express dated December 22, 2010 that the West coast Coffee shops and restaurants would have to increase the prices of drinks by early next year due to costlier prices of raw materials, especially sugar said Dr Benjamin.

Many among the poor parents, especially in the interior are unable to afford to feed their poor families when the prices of essential commodities have increased drastically due to the increase in prices of fuel and sugar, resulting in the indiscriminate increases in food, groceries and rations.

How do we expect to eradicate poverty by end of 2010 as declared by the Government when the majority of the people, especially the poor became poorer and hardcore poor families have increased in Sabah.

There was no logic to claim that Sabah poverty index had improved, let alone that even the basic rural infrastructures, public amenities and utilities in the rural areas were grossly neglected albeit the Government had allocated the billion of Ringgit in the 9th Malaysia Plan for the rural infrastructure development.

But, there have not been any positive signs of improvement in the rural infrastructures in the interior. Public complaints of bad rural roads, damaged bridges, no basic infrastructures, no piped, treated clean water in many rural areas in the interior, and a host of other problems that needed to be improved in order to eradicate poverty and social problems in Sabah.

According to Sabah DAP interior mobile service team general survey of the hardcore poor and poor, the reality was shocking. They found that even those living in the urban and sub-urban districts were in poverty due to unemployment, retrenchment, lack of opportunities, bad business, sickness and old aged.

Sabah DAP urged the Government to listen to the plights of the people of Sabah and take positive steps to reduce the prices of fuel, sugar and other essential commodities that have affected the majority of the people, particularly the people in the rural areas who are suffering in great hardships, and depressions.