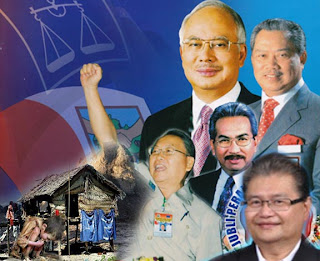 SABAH DAP interior conducted a survey on rural poverty problems of the rural populations and found that BN Government have grossly neglected the rural people since ‘Merdeka’.

Dr Benjamin Yapp, Sabah DAP Parliamentary Liaison Chief for Keningau and Tenom has spent eight months in conducting the research into the poverty problems facing the hardcore poor and poor in the interior.

Why are people still in poverty if the Government have actually allocated the Billion Ringgit in the 9th Malaysia Plan for allocations of rural infrastructure development projects since the last general election?

The people of the interior are anxious to know and they are waiting to see the results but unfortunately there seem to be no further improvement in the basic rural infrastructures and amenities that have contributed to the poverty problems and affecting the livelihood of the rural people.

Sabah rural populations are in acute poverty since independence. Why is this happening in our State when we have rich natural resources and abundance of vast agricultural lands in the interior?

Can we blame our poor rural folks for their own predicament? We have to examine the attitudes of the Government leaders and the rural people where they have responsibility in making poor decisions, and have been responsible for their plights.

The Government of the day should pursue policies that would enhance successful development for the rural people. The causes of poverty and inequality in the interior of Sabah are no doubt real and need to be addressed immediately without having to wait till the next General election. It is much too late, and the rural people are in a dilemma and suffered from poverty and great hardships.

Sabah DAP interior mobile service discovered that many rural poor have less access to health, education and other services due to poverty, inadequate rural infrastructure facilities and amenities. These problems have inevitably resulted the hardcore poor and poor rural folks being typically marginalized from society and they have little chnace for representation or voice ‘Suara Rakyat Pedalaman’ in the public and political debates, resulting in more difficult to improve their hardships.

The Government should listen to the constructive criticisms and suggestions of good opposition leaders if it wants to improve the situations and poverty problems in Sabah.

Sabah DAP is a relevant political party that is practicing the policies of Transparency, Integrity, Good Governance, Efficiency and Effectiveness, Responsibility and Result. Unfortunately, there are certain arrogant politicians who keep on denying and attacking the oppositions when there are weaknesses and problems that the opposition leaders try to point out to the Government as the ‘eyes and ears’ of the grass-root people.

However, they are also good leaders among the politicians but they probably are too busy to meet the grass-root and resolve their daily problems. Sabah DAP can complement with the Government as we care and have the sincere heart for the people, regardless of their status, beliefs, or, affiliations as we see them as our ‘brothers and sisters’ in our communities.

It is a sad fact that the poor rural people have been marginalized from the society as many problems such as PPRT assistance, welfare for the senior citizens, scholarships, distribution of ‘e-Kasih’ programs for the poor, and the like have not been fairly and properly administer and there are many complaints from the hardcore poor and poor that despite of their repeated requests and appeals for poor assistance from the Government through their community leaders, they have been totally ignored and deprived of the facilities for many years.

By contract to the poverty, the more fortunate and wealthy people are more likely to benefit from economic and political policies. Looking at the budget for 2011, the BN Government have approved RM109.7 Billion for Peninsular Malaysia whereas in Sabah and Sarawak that are badly in need of basic rural infrastructures, road constructions, building of bridges and public amenities and utilities are only getting RM9.5 Billion? Have we been marginalized? How then could the poverty eradication be achieved when the rural areas are being marginalized?

The Government politicians should address the daily crisis of poverty and the related staggering problems and plights of the rural people instead of wasting the tax-payers monies to criticize and blame the oppositions and people who have the sincerity and courage to bring up issues of public interest for the benefits of the people.

Sabah DAP is not against any good Government, but if the political leaders are not doing their duties and carry out their responsibilities as the people's representatives, what else can we do but point out the weaknesses and show to them what are happening behind their luxury Government and ministerial offices.

Sabah DAP meant business and we work hard for the interest of the common people. We do not believe in relaxing in the air-conditioned offices but we sacrifice a lot to go down to the grass-roots (‘turun padang’) under the hot sun and meet the common people instead.

But each time when we bring out the bad news and grievances of the people, those irresponsible so-called politicians attack us as if we are a useless, uncivilized group of people! This bad and arrogant attitude of the leaders must change or, we will change the unproductive and inefficient leaders and the Government in the next general election!

According to the survey conducted by Dr Benjamin Yapp, it was found that the hardcore poor and poor in the interior are lacking of proper food and healthy nutrition as they could not afford to buy proper, healthy food and rations for their poor families. Hunger strikes the hardcore poor, the poor rural folks.

If Government's efforts are only directed at providing food, charities, or improving food production or distribution, then the structural root causes that create hunger, poverty and dependency would still remain.

This happens with the hardcore poor and poor in the rural kampungs as they are very much dependant on the ‘hand-outs’ and have the tendency to take life easy and some getting lazy to find jobs.

Hence, the weaknesses of the Government leaders and politicians such as a lack of individual responsibility, bad government policy, exploitation by people and businesses with power, connection and influence should be avoided.

It is of paramount importance that the authorities concerned should deploy resources and energies to relieve hunger through technical measures such as improving agriculture, introducing the new concept of ‘agro-enterprise’ for rural people by improving their knowledge, skills and agriculture development as well as inter-related issues such as poverty means that political solutions are likely required as well as for meaningful and long-term hunger alleviation programs.

There are many inter-related issues causing hunger relating to economics and other factors that cause poverty.

The rural people are having problems in relation to land rights and ownership, diversion of land use, increasing emphasis on export-oriented agriculture, inefficient agricultural practices, particularly in the interior districts.

The Government could make efforts towards the elimination of poverty. Sabah is endowed with rich natural resources and abundance of suitable agricultural lands in the interior, there should be no excuse for any people's representatives and Government leaders not to capitalize on such good resources for the development of socio-economic conditions for the rural people, and the State economy.

On the contrary, the lack of basic rural infrastructures, inadequate amenities and ultility problems in the interest need to be addressed by the Government immediately. The District of Keningau and Tenom for instance, have water and sanitation problems that have been affecting the rural communities for many years.

In Melalap sub-district for instance, the rural communities have to depend on gravity water supply that is not clean, and in, hygienic as the water source from the remote hill-sides often contained germs and bacteria that cause diseases such as e-coli, diarrhea out-break as the water is not treated and healthy for drinking purpose.

Often, there are wild animals roaming around in the watery places that caused germs and diseases when they passed urine, crossing the steams carrying skin diseases and droppings into the mountain streams and waterholes.

Sabah DAP urged the Government to improve the socio-economy of the rural people and improve the basic rural infrastructures that are badly in need without further delay as the situations in the rural areas are getting worse than ever and the backwardness of the rural society have affected their social, economic and political development.