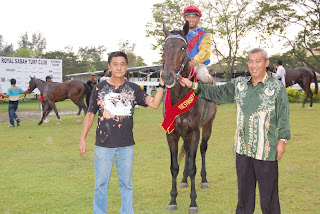 CHAMPION….Golkhan (right) together with the Christmas Cup champion, Babaero and its owner after putting on the champion's sash.

Running in Race 10, the last of the day, over 1,800m, Babaero was a bit slow coming out of the gate giving Royal Chip (Lo Tet Phin Stable) the opportunity to lead for most part of the race.

The wet track, however, did not slow down Babaero’s pace and it proved its prowess when it managed to overtake Royal Chip at the home stretch and dashed pass the finish line first.

Coming in third in race for Class II ponies was Bongawan Prince of Bongawan Stable and Myth Territory of Multi Stable came in fourth.

Earlier, the inaugural Thoroughbred Cup (Race Eight) at Tambalang created a history of sorts for Royal Sabah Turf Club (RSTC) when it paid a handsome dividend of RM17,108 for the four fore-cast due to an upset.

The previous biggest payout in Tambalang was over RM15,000.

Talent Star (ex-Shambho Gaya) of Horseshoe Stable proved to be a strong contender when it outclassed a nine-horse field including the pre-race favourite, Lily Express of Golden Stable over the distance of 1,200m.

In second place was Century Beau of City Star Stable, while Lucky Ocean of Horseshoe Stable and Royal Danske of Kinabalu Stable came in third and fourth place, respectively.

The excitement created during both races kept thousands of punters and horse/pony race enthusiasts on the edge of their seat.

Meanwhile, the main Cup race on Saturday was won by Butterfly of Casa Stable followed by Carry On Happy of Salam WIjaya Stable, Pengkalan Girl of Kaybee Stable and Jungle Master owned by Wee Kok Fah.