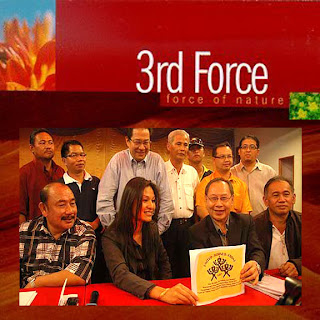 THE ambitious thrust of the third force in Sabah and Sarawak, under the aegis of the newly-launched United Borneo Front (UBF), is the return to the pre-1963 status of the two states as equal to Malaya (now Peninsular Malaysia).

Third force ideologue and UBF chairman, Jeffrey Kitingan, uses an analogy to describe the pre-1963 status of Sabah and Sarawak.

Unfortunately, according to Jeffrey, Malaya demolished the Sabah and Sarawak longhouses after Malaysia and instead gave both states each a bilik (room) in the Malaya (Peninsular Malaysia) longhouse. From being a federation of three territories – Singapore left two years later in 1965 – in equal partnership as per the 1963 federation, Sabah and Sarawak were reduced to being two of 13 states under the 1957 federation.

Anti-illegal immigration activist Dr Chong Eng Leong in his July 2009 book, “Lest We Forget – Security and Sovereignty of Sabah”, states that the ‘the federation’ is interpreted as the federation established under the Federation of Malaya Agreement, 1957.

There’s some dispute here among the legal fraternity as well over whether the 1963 federation really exists.

Many lawyers in the know swear that the 1963 federation ceased to exist with the departure of Singapore in 1965. The Federal Constitution was subsequently amended quietly to provide for the resurrection of the 1957 Federation of Malaya, and now masquerading as Malaysia, and Sabah and Sarawak added as two of its states. In short, the definition of federation in the Federal Constitution today is that as per the 1957 Malayan Federation and not the 1963 Malaysian Federation.

Jeffrey sees the departure of Singapore eventually facilitating Malaya in the work of demolishing the separate longhouses of Sabah and Sarawak in the Federation of Malaysia and both states being given a bilik each in the Malayan longhouse.

If Jeffrey’s theory is legally correct, then it is incumbent on the state governments of Sabah and Sarawak to raise the issue with the federal government in Putrajaya and bring it to the urgent notice of the United Nations Security Council. The Security Council can allow the UN General Assembly to debate the Sabah/Sarawak motion before making its final ruling. It appears that Sabah and Sarawak became independent of Malaysia at the same time as Singapore in 1965 but were retained illegally in Malaya/Malaysia as per the 1957 federation.

In the event that the Security Council decides in favour of Sabah and Sarawak, then the people of the two states should decide whether they want to enter into negotiations with Malaya for the resurrection of the Malaysian Federation under a new treaty which would provide a nation of three territories in equality and partnership. In short, Jeffrey’s idea of a nation of three separate longhouses. This makes a compelling message, in its simplicity, easily understood even in the rural reaches of Sabah and Sarawak.

However, it’s not for Jeffrey alone to decide that all three longhouses should stay and work together. The people of Sabah and Sarawak, after having been cheated by Malaya for nearly half a century, may be tempted to say “enough is enough” and decide in favour of going separate ways.

Apologists for Putrajaya concede that while the 1963 Federation ceased to exist with the departure of Singapore in 1965, it in fact continued when the other three partners – Malaya, Sabah and Sarawak – continued with the partnership. The catch to this theory is that the feeling of partnership and equality no longer exists in practice and moreover the Federal Constitution makes no reference to the 1963 Federation but the earlier one in 1957.

In short, the Federal Constitution itself acknowledges that it is all about the 1957 Federation and not the 1963 Federation. This is evident in the description of the constituent parts of the federation in the Federal Constitution which takes the 1957 version and adds Sabah and Sarawak as the 12th and 13th states. Wither the equality and partnership!

Patently, there needs to be closure on this subject which is still in the legal twilight zone. It’s a wonder that the best legal minds in this country have not spotted this anomaly in the constitutional structure of the country.

It’s unlikely that Putrajaya will move forward on this subject and may prefer to adopt the deaf, dumb and blind approach of the “hear no evil, speak no evil, and see no evil”. This is the same approach it has taken on the Philippine claim to Sabah and this has further complicated the issue considering the demise of the 1963 Federation in 1965.

Many Sabahans have come around to the view that the Philippine claim to Sabah must be settled one way or other. If the International Court of Justice rules that the Philippines has sovereignty over Sabah, they say, so be it. At least, as part of the Philippines, Sabahans will have an equal chance as other Filipinos to be the president of the country. Besides, there is much affinity between the native Christian majority in Sabah – now under serious threat of disenfranchisement – and the Philippines.

This is not the case in the Malaya/Malaysia Federation where there is no hope ever of a Sabahan or Sarawakian emerging as the prime minister of the country.

UBF strategists add that Sabah and Sarawak would have been much better off as autonomous provinces in Indonesia which keeps only 30% of the revenue for the centre unlike in Malaysia where all revenue and 95% of the oil and gas revenue goes to the federal government. This is seen as the root cause of the grinding poverty in the two states, the poorest in the so-called federation.

It’s by no means exactly clear what UBF can do about the unresolved issue of the demise of the 1963 Federation in 1965. On its part, it can put together a legal memorandum on the constitutional issues raised and forward them to the Sabah and Sarawak governments, Putrajaya and the United Nations Security Council for their deliberation.

No matter what happens, this is an issue which will not go away anytime soon. However, on a brighter note, the recognition by all parties concerned that there is a serious constitutional problem here that needs to be resolved would be a good start.