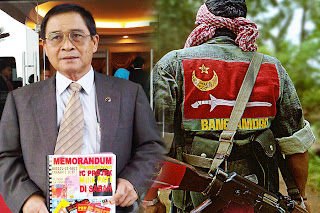 ON June 10, 2010 I asked a question in Parliament to the Home Minister asking him to clarify a statement by the Director of National Registration Department in Kota Kinabalu that there is no Malaysian Identity Card issued to illegal immigrant in Sabah.

The minister answered to confirm the said statement of the director. He however added that if there are evidence then he welcome it to be submitted to him for his Ministry to act accordingly. I have issued a statement that I will give him the evidence.

I have therefore finalized compiling evidences to prove my statement and have submitted it to the Deputy Minsiter of Home Affairs as the Minister himself was not present in the Dewan seating entitle ‘Memorandum Pembatalan IC Projek Milik PATI Di Sabah’.

I have thus carried out my responsibility as Malaysian in Sabah by providing the Ministry with the documented proof and hope that the Home Ministry will now act accordingly to solve this 30-year old problem.

Much of what I will be saying here is published at Sabahkini.net.

The title of this memorandum is adopted as such with the aspiration that the Federal Government will take concrete action in nullifying all ICs and Mykad issued to foreigners using dubious means. The Issuance of the genuine Mykad is tantamount to granting automatic citizenship to these unqualified immigrants.

The whole exercise of issuing Malaysian ICs and Mykad to unqualified body of persons were contrary to the requirement of the Federal Constitution violates the spirit of the formation of Malaysia of which Sabah together wirh Sarawak were signatory. I strongly believe that this exercise was purely for political purposes. In a real sense, these foreigners with genuine Mykad and having been registered as legal voters in Sabah are in fact the actual ‘Fixed Deposit’ in as far as the people of Sabah should be concern about.

I, together with other Members of Parliament from Sabah have tried to raised this issued up in Parliament both by oral as well as written question. However, the short period allocated to us didn’t permit us to obtained the necessary reply from the Ministry concern and thus this issue have been dragged on for a long time without any indication of whether it will be answered or otherwise.

Among others. This memorandum calls for action from the Government to immediately suspend all activities relating the issuance of Malaysian ICs to foreigners and to immediately issued a statement to cancel all Malaysian ICs and Mykad that have been issued in contravention to Section 3, Clause 1, Chapter 14, 15, 16, 18, 19 and 22 of the Federal Constitution and Instrument (Peraturan Pendaftaran) National Registration Department which clearly spelt out the requirement for citizenship to be granted to any individuals. Any deviation or contravention from this clause and chapter is against Article 4 of the Federal Constitution which states as follows: “Perlembagaan ini adalah undang-undang utama Persekutuan dan apa-apa undang-undang yang diluluskan selepas Hari Merdeka dan yang berlawanan dengan Perlembagaan ini hendaklah terbatal setakat yang berlawanan itu.”

These also are in contravention to the 20 Points Agreement which became part and parcel of the Malaysia Agreement which among others, Point 6 and Point 10 refer to Immigration control and Citizenship;

The recommendation in paragraph 148(k) of the Report of the Cobbold Commission should govern the citizenship rights in the Federation of North Borneo subject to the following amendments:

The Issue of ‘Dubious Citizenship’ has now become an ‘Open Secret’ and is not only the most discussed topics in coffeshops talk but is being debated widely and openly in the mass media, Sabah State Assembly Meeting, in Parliament and have reached the office of the Prime Minister and the National Palace.

One of the NRD Officers who have been placed under ISA detention is prepared to provide evidence that the national registration Department in Sabah is involved in the issuance of thousands of Project ICs to illegal immigrants between 1991 to 1994.

All these years, Sabahans, regardless of political affiliations and religious beliefs have joined hand in combating the illegal immigrants issues by issuing and sending out written and oral protest to the Government and sending those notices even to the knowledge of His Royal Highness the King.

This silent protest coming from Sabahans shows that the people are already fed up with the empty promises made by the authorities in trying to solve this 3 decades old menace.

The greatest challenge will be coming from children of these illegal immigrants (PTI) who are undocumented. If we have half a million pairs of PTI having five children each over a period of six years; in fifteen years time we will have almost 3 million adult populations comprising children of illegal immigrants. What is to prevent them from petitioning for a United Nation-sponsored referendum to claim Sabah as their own?

The time to act is now. The Home Ministry and the Malaysian cabinet must consider and approved this memorandum in order to preserve the peace, security and sovereignty of Sabah. This memorandum is a Trust given to me by the people of Sabah to be handed to the Federal Government in order for this issues to be resolved in the wisest and most committed way, and must be solved before the next General Election.