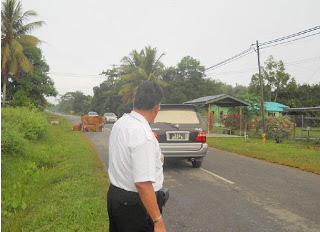 SABAH DAP questioned the local authority in Bingkor, Keningau for failure to prevent road accidents due to irresponsible cattle owners who caused public nuisance and fatal accidents because of their stray cows roaming around the open public areas and roads in the rural sub-districts in Keningau.

This was one of the unfortunate incidents that caused a loss of life and Bingkor, Keningau was well-known accident prone areas not because of the careless drivers but due to those irresponsible cattle owners who couldn't care less on the public safety and allowed their cows to graze grass indiscriminately everywhere without any proper supervision.

What have the community leaders been doing all these while if such dangers existed infront of their doorsteps? This serious problem on road public safety had affected the rural people, particularly those motorists who had to drive along the road at night without street lights in most parts of the rural areas in and around the District of Keningau.

One would wonder why the Government had neglected the people of the interior for so long. Imagine that basic rural infrastructures, public amenities and utilities had been inadequate and neglected in most parts of the rural areas.

The Keningau Rural District council should investigate the fatal accidents caused by indiscriminate rearing of cattle in Bingkor, Keningau and set standard procedures to control and monitor for any indiscriminate rearing of cattle in their respective rural areas as the public are very much concerned on the road safety of the rural people living in these areas.

The public had made numerous complaints to the local authorities in Keningau District but until to-date no actions had been taken to resolve this problem that posed dangers to regular commuters and cars that ply the rural roads in Bingkor, Keningau.

There had been reports of fatal accidents that caused loss of life due to the irresponsible cattle owners who had no concern on the public safety and the authorities concerned should take stern actions against the culprits.

Sabah DAP felt sad to note that recently there were cases of road users been killed in a collision with stray cows in Bingkor. In the Borneo Post dated December 24, 2010 an 18 years old young man was killed when his motorcycle collided with a stray cow at Tudan Baru Road in Keningau.