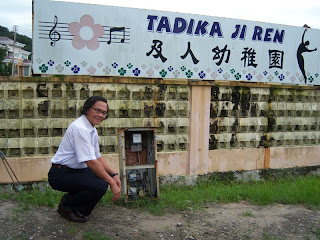 THE highly dangerous electricity switch box just in front of the Likas SM All Saint school is something the local authorities should look into with immediate action before someone is electrocuted.

Edward Ewol Mujie was informed by the KK MP Dr. Hiew King Cheu when the KK MP office received the complaint from some concern member of the public. Edward inspected the switch box and found the complaint is valid and it is indeed posing a dangerous situation with wire exposing and sits just next to the walkway.

Edward said this is dangerous and it is just opposite the schools and school children frequently sitting around the area waiting for their cars and school buses. The DBKK and SESB should send their people to immediately rectify the dangerous switch box before any fatal accident can happen. There are still plenty of such dangerous switch boxes all over KK area like the lamp poles, street light switch boxes and meter boxes which are not covered, locked, or with wires exposing.

KK is a city now and we cannot be seen as a city that looks so ugly and disorder. Edward further pointed out that in the KK and Inanam areas, many street poles had been knocked off, at least 50 over numbers, why DBKK cannot replace these immediately. It is so unsightly when you see the pole is bent and near collapse.