ABOUT MYR2 PER MALAYSIAN 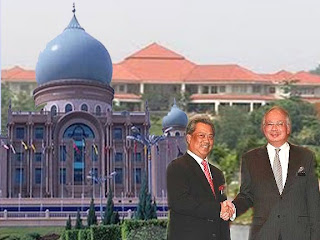 THE OFFICIAL residences of the PRIME MINISTER and his Deputy cost the taxpayer RM48.7 million in the last five years for rent, repairs, electricity and water, Datuk Seri Mohamed Nazri Aziz has revealed.

The minister in the Prime Minister’s Department said this in his written response to Siti Zailah Mohd Yusoff (PAS-Rantau Panjang) last week. Repair work on the homes for the same period amounted to RM3,581,744.78 while electricity cost totalled RM10,267,868.15 and water RM1,967,386.55, he said.

At a press conference in Parliament this afternoon, Siti Zailah slammed the administration for the exorbitant bills merely to maintain the two homes of the country’s top leaders.

She pointed out that while the government complained of a ballooning subsidy bill and was hiking prices for the common man on the street, the country’s top two leaders were recklessly racking up hefty bills with taxpayers’ funds.

“They ask the people to tighten their belts, they say that the economy is on the decline but our two top leaders are spending the people’s money for this,” she said.

She said that according to Nazri’s figures, rent for both homes cost more than half a million ringgit for one month alone or at least more than RM8,000 a day per residence.

“Repairs cost more than RM60,000 a month, here we are facing an economic crisis and their electricity bills are costing RM5,704 a day and water bill more than RM1,092 a day,” she said.

Kota Raja MP Dr Siti Mariah Mahmud agreed with her PAS colleague and questioned why both official residences were being rented from Putrajaya Corporation, the local authority that administrates the federal territory of Putrajaya.

“What is their long-term plan? Will this turn into government property in the end? We want to know the terms of their agreement,” she said.

Rasah MP Anthony Loke said the electricity cost for both the prime minister and his deputy’s homes could pay for his bills for the next 100 years.

“Their water bill alone can go for 5,961 people at RM11 for two persons. Are there nearly 6,000 people staying at both homes? This is a shocking figure. They tell us to eat less sugar and they are slashing subsidies and hiking prices but yet they spend this much for their homes,” he said.