BERMAN ANGKAP GETS IT WRONG ABOUT SAPP 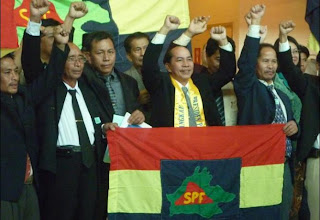 IT WOULD be ideal by leaving it to State based political parties to contest in the state; they formed an alliance in the coming GE against the mighty BN as mentioned by the Sabah People Front Party’s (SPFP) President Berman Angkap, recently.

But as to why Berman is proposing Datuk Seri Anwar Ibrahim to lead it, I wouldn't really understand? Anwar Ibrahim has no power to decide what for us in Sabah. I'm of the opinion, Sabahans are able to lead individually or components parties in the event there is such thing given a chance

For Beraman Angkap saying SAPP is Chinese based political party I must suggest to him to update his knowledge on political parties’ development in Sabah, in particular SAPP.

I agree Chinese leader leads SAPP at the moment Datuk Young Teck Lee, this is just like saying Air Asia is led by Tony Fernandez or The Hong Piow heads Public Bank. Does it matter who lead what for the good of the people and the country? I’m talking about leaders with political maturity too.

My question is, what's wrong with a Chinese, Kadazan, Kadayan, Bajau, Brunai and the like? Penang has always had a Chinese Chief Minister even during BN.

Now Malays are migrating to Australia, tell me who is the Prime Minister of Australia?

But let me clarify a bit, SAPP has developed into something very Sabahans, a non racial political party, name one political party is Malaysia has constitution like SAPP, UMNO and the rest surely are not.

SAPP is no longer as it was made to do like during in BN time where everything else based on racial line.

Our restructuring and rebranding of SAPP has well above our imagination even 5 years ago, now saying SAPP is Chinese based party is totally wrong. Any non-Chinese wants to compete to hold party’s position by all means. We’ve more non-Chinese members and non-Chinese leaders in SAPP now.

We’re almost come close to 50 years having the same routine system of government, I think we in SAPP want to change and make Sabah and Sabah people forward looking, this is what we’ve to offer not the same old routine dilapited outlook.