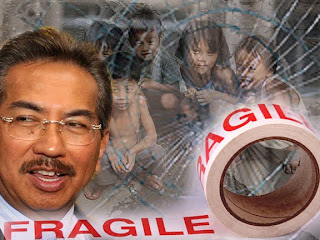 WHEN I wrote in June that according to the state’s economic survey published earlier this year, that Sabah had averaged 8% growth in the last five years, many people asked “Do you really believe this?”

Can we really believe Sabah’s data? The Malaysia’s Department of Statistics guides the states collecting and processing data, but does not check whether the job is done correctly. Cynics think Sabah’s notoriously manipulative politicians must have fudged the data for false publicity.

The data show enormous swings in agriculture from year to year. Because of this, Sabah’s growth averaged 8% over the last five years, but only 6.3% over the last six years. Still, we can say that it has been growing at 6-8%, and that is miracle growth.

Second, politicians are uninterested in fudging the state domestic product. No politician can win an election by claiming that economic growth is 8% rather than 6%: such statistics go over the head of voters, for whom personal experience is what matters.

Sabah’s politicians did not fudge the data and then hold a press conference to announce record growth. Rather, I dug out the 8% story from the Department of Statistic’s data bank, and many were manifestly surprised to hear about it.

Third, if you add up the state data on gross domestic product, the sum is well below national GDP. So, any errors by the states seem to be on the low side rather than the high side.

Fourth, most states, not just Sabah, showed strident growth in the last five years. This fits well with the boom in national GDP in 2004-10, so the state data look plausible.

Fifth, state governments usually want to claim that they are in dire straits and so merit additional funds from Kuala Lumpur. Back in the early 2000, I found that Selangor was for some time the fastest growing state in Malaysia, and I asked what accounted for fast growth.

To my surprise, state officials and politicians were dismayed at my questions. They were used to moaning and groaning about their poverty and the need for more central hand-outs, so they looked on me almost as an enemy.

For these reasons, I believe that the economic boom in Sabah is real, not a statistical fudge. A visit to Sabah provides plenty of anecdotal proof. In Pairin’s time, anybody building a house or booking a new car promptly got the tax boys or even the famous Anti Corruption Agency (ACA) chaps or even burglars visiting them. Today home construction and car sales are booming. Traffic jams have replaced deserted streets.

In Pairin’s time, swaggering goons mainly illegals and some Sarawakians showed off their ‘parangs’ and some even their guns in public. Today no gunman is visible. The Musa Aman administration has convicted hundreds of people, including dozens of businessman and politicians, some from the ruling party itself — for violating the Arms Act.

The old cloud of fear has been replaced by peace and confidence. Safety has allowed small businesses to burst into activity. Women say they are no longer afraid to walk the streets. Digi and Maxis and even Celcom says Sabah has the fastest growth of talk-time in any state.

The economic miracle has been led by construction, which has averaged a colossal growth rate of 37% per year for the last five years. Government development spending has zoomed from RM 1.5 Billion to RM 3.3 Billion per year.

Most impressive has been the rise in road construction about thousands of kilometers has been built. Security plus road and telecom expansion have incubated a boom in small business and domestic construction.

However, large-scale industry remains on the sidelines. Organized sector output actually fell at constant prices, and has stagnated under Musa. Many large industries have proposed big investments, but these will be pursued only if Musa Aman is re-elected and reappointed as chief minister.

Musa Aman swept the polls in the 2008 elections, with opposition DAP getting only 1 seat out of the 60 seats seats. Optimists theorise that if Oppossition SAPP/Pakatan Rakyat under Yong Teck Lee returns, Yong Teck Lee will come back a changed man, full of the efficient technocracy he displayed as Chief Minister in 1996-98.

But most people fear that Yong Teck Lee will bring back his businessmen friends like Joseph Ambrose Lee and than the raping of the state coffers will return. Hence the future of Sabah’s economic miracle remains in doubt!