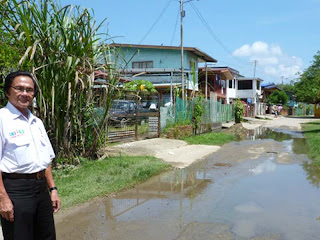 SABAH DAP Vice Chairman, Edward Ewol Mujie yesterday was called in by residents of the Taman Cendrakasih in Kolombong next to the Lintas Highway to inspect the poor flooded road and clotted drains in the housing.

Edward found certain drains here are blocked due some houses while constructing their entrance road to their house had blocked the drain. The flow of the water is blocked and causing overflow of the drain water to the road surface.

He said this is not acceptable because when it rains, the situation will be even worst and the flooding of the road is as deep as two feet. The road next to the Dewan Cendrakasih is the worst case of all.

He immediately informed DBKK and requested the drain section to come over to Taman Cendrakasih to help the people here to clear all their drains and to ensure that there will be no more flooding on the road. The most important thing is that the drains should not accumulate stagnant water.

Besides in Taman Cendrakasih, there are some foreigners living in rented houses, and this raised concern by the local resident here. Edward wants the authorities to check through these alleged foreigners and make sure that they are not illegal immigrants.