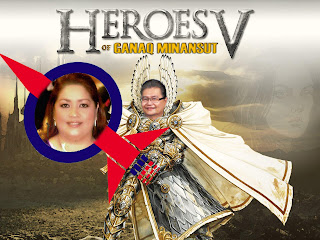 SABAH DAP was disgusted with certain irresponsible UMNO politicians for being too arrogant and have no due respect for the oppositions. Instead of focusing on the rural development agenda, these so-called politicians insulted the intelligence of the peoples.

Dr Benjamin Yapp, Sabah DAP Parliamentary Liaison Chief for Keningau and Tenom in response to the unfounded criticism of Datin Rahmahjan Sulaiman Khan, Tenom's UMNO Women Chief being arrogant in her statements in the Daily Express dated July 25, 2011; criticizing the opposition leaders as nothing to offer, being liars and all sorts of childish allegations. This shows the kind of leaders who are irresponsible people!

Do not underestimate the capability and integrity of opposition leaders! Sabah DAP has sincere, responsible leaders of high caliber! It is absolutely insulting for her to label oppositions as lairs!

The peoples could judge what BN has done for the past decades in the interior. There were no basic rural infrastructures, rural roads were in bad shape, inadequate public amenities and many rural areas have no piped water and electricity supply.

The Government promised to bring about rural infrastructure development with the announcement of Billion of Ringgit. Until today, nothing much had been done! Who is telling lies?

Stop criticizing the Oppositions and get on with your tasks and responsibilities to fulfill your election promises. The rakyat in the interior are not fools and they could judge the performance of the Government.

Sabah DAP advised Datin Rahmahjan not to be rude to the oppositions as this shows the type of low self-esteemed and low mentality of leaders that made such silly statements to insult the intelligence of the peoples.

She should instead emulate the American Politicians, they never criticize the oppositions but instead they prefer to talk about what politicizes and development for their citizens instead of accusing the oppositions!