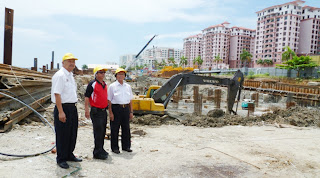 BRIEFED…..Hiew and Edward being briefed by the project representative on the work progress.

THE KK MP Hiew King Cheu and the Sabah DAP Vice Chairman, Edward Ewol Mujie last Saturday made a surprise spot-check on the project site of the KK City Waterfront Complex construction site to ensure that there is no pollution and disturbance to the environment and especially the cleanliness of the surrounding area in the waterfront.

The duo was met by the person in charge and the manager of the site. They were shown around the project site where they were given a briefing on the various precautions measures that they have taken to provide the necessary protection on any possible pollution to the environment.

KK MP Hiew was happy with what he saw on site, and he also checked on the water side to see whether there is any disturbance caused by the construction work to the sea. He found the sea front is well protected by a wall of metal sheet-pile which is set in two layers, and there is no sign of leakage of dirty water from the site into the sea.

A filter cloth screen is erected in the sea to cut off any foul water and debris getting into the sea. The pollution protection work seems satisfactory and according to the EIA requirements.

The construction work on the foundation and basement is in progress. Hiew was told that the work is slightly behind schedule but the contractor will speed up with the work progress to catch up with the schedule.

The first portion of the sea front pedestrian board walk in front of the Anjung Senja is near completion and will be completed next month. The board walk will eventually extended to cover the whole water front including the frontage of the complex. This will be a nice place for the KK folks to go during leisure hours in the future. 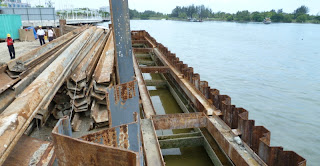 Hiew urges the contractor to pay particular attention to the various aspects during the construction period whereby the public can be affected. There should be more safety signage to be erected inside and outside of the construction site. The public must be warned of the trucks movement from the site.

Hiew said he being the people’s representative in Kota Kinabalu City, it is his responsibility to go round the city to perform his duty to ensure the well being of the city and its people. This requires his constant and devoted attention and care. His job is very demanding and exhausting at times.