PLEASE SAVE HER FROM COMA! 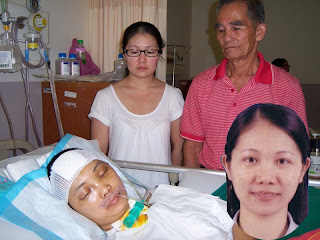 THE KINDERGARTEN teacher Loi Ik Thai, who was knocked by a no-parking sign pole on her head in Damai Kota Kinabalu remains unconscious after five weeks of treatment in the SMC hospital. Her condition is stable and still in a coma. There is some sign of improvement and do not know exactly how long it will take for her to recover consciousness. The family is very worried about her condition.

Kota Kinabalu Member of Parliament Hiew King Cheu has openly appealed to the general public to kindly donate to assist her on the mounting hospital bills. The public donation is very encouraging, so far the figure is coming up to a total of RM53,000.

The amount of money needed in the future until her full recovery is going to be hard to be estimated. The family wishes to extend their sincere thanks and gratitude towards those who have made their kind donation and fully appreciated for their effort.

MP Hiew visited the poor teacher and was informed that the doctors has cut away the top part of her skull for cleaning the brain, and stitched back her scuff without replacing her skull bone. They are waiting for her to regain consciousness before the skull is finally reinserted later.

MP Hiew has checked with the Mayor of DBKK and he was informed that the DBKK are chasing for the claim of their public liability insurance from the insurance company on this case of accident on her behalf. They are not sure as when this money can be release to them, but they will work hard to get it as soon as possible. Hiew also urges the insurance company to make payment as soon as possible.

Hiew said the teacher is not regaining conscious and the family are worried on how long the situation is going to last. Even though she regains consciousness, there may be another round of operation on her head and that will incurred a further sum of money. Hiew again urges kind hearted people to make generous donation to the father’s account to help the teacher and their family.