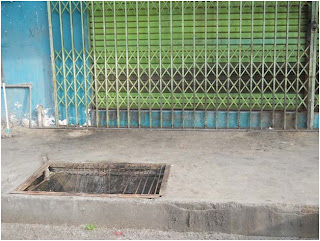 Unaware of the dangers of the death trap within their walk way, pedestrians especially the elderly people and children would accidentally fall into the death trap in a statement made by Dr Benjamin Yapp, Sabah DAP Parliamentary Liaison Chief for Keningau and Tenom.

He was surprised why the local authority had over-looked the dangers and neglected their normal duties to ensure the town was kept clean, secured and people’s friendly environments. Such damaged walk-way and men-hole posed extreme dangers to the public.

Dr Benjamin Yapp inspected the place where he spotted the damaged hole while talking a walk around the township to inspect the surrounding township.

There was of a previous complaint made by a local shop-keeper to the local authority in the rural district council Keningau but so far no positive action was taken according to rectify and repair the area in a complaint made to Dr Benjamin Yapp.

Sabah DAP urged the local authority to take immediate cause of action to inspect the damaged hole before anyone gets hurt. Innocent person meet with a fatal accident that may cause broken limbs if not culminating to death as the hole was large, deep with sharp iron rods.